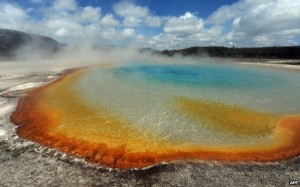 Yellowstone is one of the planet’s greatest time bombs!

And a recent study indicates that Yellowstone’s magma reserves are many magnitudes greater than previously thought.

Underneath the national park’s attractions and walking paths is enough hot rock to fill the Grand Canyon nearly 14 times over.

Geoscientists have now completely imaged the subterranean plumbing system and have found not just one, but two magma chambers underneath the giant volcano as featured in a study published in the journal Science.

The main new thing is that the researcher group has unveiled a deeper and bigger magma reservoir in the lower crust. They found the missing link between the mantle plume and the shallow magma chamber!

But now they have found a deeper one, 4.5 times larger, that sits between 20 and 50 kilometers below the surface. The link!

Hopefully it will help scientists better understand why Yellowstone’s are some of Earth’s largest explosions in the last few million years.

And last year in July the roads began to melt so national park authorities closed the scenic Firehole Lake Drive to keep people from burning their feet – or basting their tires.