27 large wildfires are currently burning out of control in the West of the USA.

Hot, dry temperatures often combined with winds have made firefighting conditions difficult, destroying homes and forcing evacuations. Here a compilations of the largest and most dangerous as of August 4, 2016. 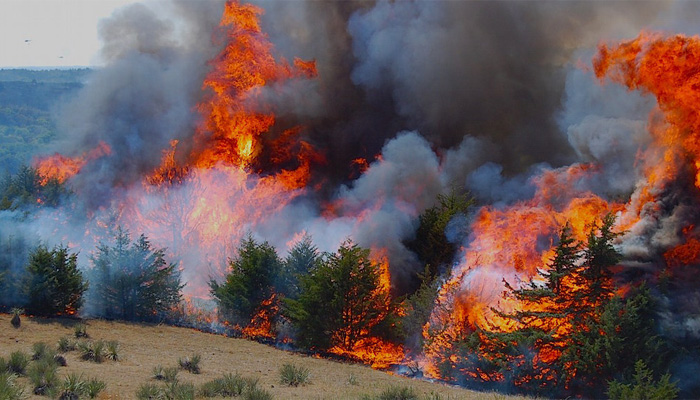 Authorities are considering potential penalties for whoever set an illegal campfire that ballooned into a massive wildfire near scenic Big Sur in California. The fire has charred almost 73 square miles and destroyed 57 homes. A bulldozer operator was killed on the fire lines.

To the north, a grass fire in a popular recreational area north of San Francisco has more than doubled in size in less than a day. The blaze has charred more than 7 square miles in Napa, Yolo and Solano counties since Tuesday. It prompted the evacuation of an RV and tent campground off Highway 128 near Lake Berryessa.

Firefighters are setting up sprinkler systems to protect buildings in Lowman as a wildfire expanded to 75 square miles. Nearly 1,500 firefighters are battling the blaze burning in rugged terrain. No evacuations have been ordered.

A western Montana wildfire has grown to 11 square miles in the Bitterroot National Forest. The fire ignited on Sunday about 5 miles southwest of Hamilton and destroyed 14 homes along with dozens of outbuildings and some vehicles. About 630 homes remain evacuated.

A wildfire burning southwest of Crater Lake spread to nearly 800 acres, prompting an evacuation warning for some parts of Crater Lake National Park. Flames from the Bybee Creek fire leaped into the Crater Lake caldera on August 1, 2016 as the blaze nearly doubled in size. The park remains open.

Progress has been made on fighting wildfires in western Wyoming, and most evacuation orders were lifted. The only area still evacuated was Granite Creek in Teton County, where a wildfire was burning in Bridger-Teton National Forest. The fire has burned 46 square miles and is 84 percent contained.

Residents have been allowed to return to their homes after a 5-square-mile wildfire prompted the evacuation of about two dozen homes about 7 miles north of Moses Lake. The blaze destroyed two homes and six outbuildings.

A large wildfire in south-central Washington has scorched about 275 square miles of brush and grassland.