The ‘Big One’ is a hypothetical earthquake of magnitude ~8 or greater that is expected to happen along the San Andreas Fault (SAF).

Such a quake will produce devastation to human civilization within about 50-100 miles of the SAF quake zone, especially in urban areas like Palm Springs, Los Angeles and San Francisco. 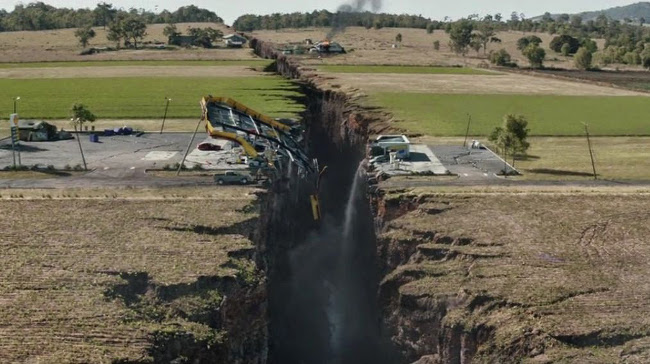 No one knows when the Big One will happen because scientists cannot yet predict earthquakes with any precision. The 1906 San Francisco quake (mag ~7.8) and the 1857 Ft. Tejon quake (mag ~7.9) took place in northern and central California, respectively, and both were ‘Big Ones’.

The San Francisco peninsula’s water supply is contained in San Andreas Lake (!) and the Crystal Springs reservoirs, both squarely on the SAF. Earthquakes with magnitude 8.5 or greater can probably only happen in California north of Cape Mendocino where the Cascadia megathrust subduction zone lies, but they are extremely rare, occurring on average once every few hundred years.

Smaller but still devastating earthquakes can happen on other faults as well: San Jacinto fault in southern California and the Hayward fault in the San Francisco Bay area. Recent experience with the Northridge quake shows that smaller and sometimes unknown faults can be a problem; until the earthquake, we did not know about the Northridge fault because it is a blind thrust fault.

Even those who survive the immediate earthquake will find themselves in danger. The first thing they will need is water, but most water mains will probably have been broken. Utilities such as electricity, natural gas, gasoline, telephones, etc. will be interrupted for days, weeks or longer. Medical facilities will be jammed and unable to handle the casualties. Most people will not be able to get to the hospital because roads will be damaged. Banks will be closed, as will any organization that relies on the internet. Little if any food or medicine will reach the area, and radio/TV communications will be spotty at best.

The best way to prepare for the Big One is to plan on camping for two weeks; think sleeping bags, tents, and living outdoors. This means not only basic necessities (food, water, clothing, shelter) but the knowledge of how to survive.

Get ready for the next Big One!