A group of tourists have gone missing and a man has died after an unexpected tsunami hit Iran on March 19, 2017.

Huge waves battered the coastline of Dayyer in southern Iran and killed a 51-year-old man. An eight-year-old boy from the local area, four Iranian tourists and another 17 people were injured.

The freak weather event caused cars to capsize as trees and canopies fell down. The gushing water also tore down tents that had been set up by travellers in the area.

Video footage taken by locals show the rising waves washing ashore and ripping through properties on the coast:

A number of fishing boats also sank as heavy rain and strong winds caused dangerous conditions in the sea, while nearby homes were flooded. 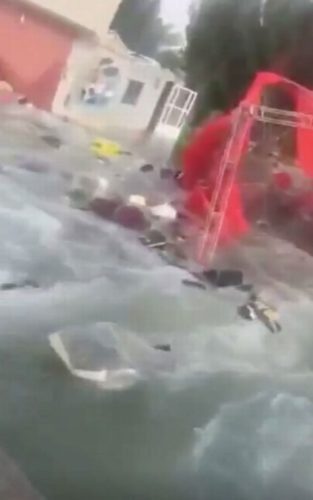 Rescue teams, who earlier rescued 10 people from drowning, are now searching for the missing people.

One local government official said the incident was ‘never anticipated‘ and ‘quite surprised travelers who had set up their tents on the coast‘.

The Cascadia tsunami will kill thousands; Can they build an escape?

Earthquake in history: Great Earthquake of Lisbon November 1, 1755 killed 90,000 people in 6 seconds – Tsunami reached US and Canada coasts within...