The rotting carcass of a 49 feet long mysterious creature was discovered Tuesday night, May 9, 2017, on Seram Island, Indonesia.

The enormous deep sea monster was discovered by a resident, who initially thought the strange animal was a stranded boat.

So what could it be? Giant squid or whale?

“Giant squid discovered by Asrul Tuanakota on May 10, 2017, at 09:00 IEST. The Giant squid was stranded on the coast of Hulung Village, Iha Kec. Huamual Kab. Seram Bagian Barat, Maluku. This giant squid is 22 m long, 4 m wide and weighs about 35 tons. It is hoped that there will be research by a related institution or university on the cause of death of this giant creature.”

I bet this mysterious sea monster is a whale. What about you? 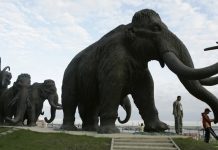 The Last Mammoth on Earth Was so Mutated, it Lost the Ability to Smell Flowers