This is not a tsunami, not even a mini-tsunami that flooded the Kampar River estuary in Indonesia on January 4, 2018. No, that’s a rare and amazing phenomenon well-known from surfers called the Bono tidal waves. The waves can reach up to 4-5 meters in height with a thundering sound ahead… So like what we usually find at sea, but in a river. Look at this footage caught on January 4, 2018, the tidal waves really look like a mini tsunami crashing on a coast:

Formation of the Bono Wave

The Kampar River widens as it approaches the sea, and its water volume increases as it is joined by various other tributaries. During the rainy season, normally November to December, the volume of river water is greatly increased, and the river’s shallow estuary becomes even wider.

The waves can travel from the sea at speeds of up to 40 kilometres per hour (25 mph), and when sea water at full tide combines with heavy rain upstream they can reach a height of 4–6 metres (13–20 ft), accompanied by a loud roaring sound and strong winds.

Bono waves can persist for four hours or more, and travel as far upstream as Tanjung Pungai, Meranti, Pelalawan Regency, 60 kilometres (37 mi) inland. Bono is not just one wave but a series of many, sometimes on the left and right river banks and at other times in the middle of the river.

The large number of ships sunk in the Kampar River’s estuary has been attributed to the Bono waves, called by locals as “Seven Ghosts”, considered to be the incarnation of the seven evil spirits.

The river is inhabited by crocodiles, hence the surfers are usually escorted by rescue boats for their safety.

The Bono waves are such an impressive natural phenomenon in Indonesia! Now, get to your surfboards to tacle the giant tidal waves and the crocs! 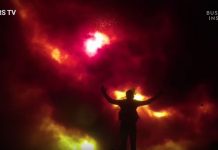