Something is getting very scary! A new strong earthquake hit off the coast of Oregon, today, August 22, 2018. This latest powerful quake raises fears among US west coast population, living in the densely populated areas on the Pacific coast. This latest strong earthquake may be a sign of the next Big One… which is overdue… And where is it going to strike? Along the Cascadia Fault Line or in California.

Another powerful M6.2 earthquake struck 200 kilometres off coastal Oregon on August 2018. The epicenter of the quake lies directly on the Cascadia Fault Line, which is part of the larger Ring of Fire – where more than 60 significant earthquakes have hit in the last few days.

Experts have warned of no damage to buildings, and there has been no tsunami warning issued for now.

Enhanced activity along the Ring of Fire is a sign of the Big One coming?

The Ring of Fire is the largest and most active fault line in the world, stretching from New Zealand, all around the east coast of Asia, over to Canada and the USA and all the way down to the southern tip of South America and causes more than 90 percent of the world’s earthquakes.

Experts know that the Ring of Fire has the potential to unleash some catastrophic quakes – and a spate in the last 24 hours has some concerned.

The strongest of which was a magnitude 8.2 which struck in the Pacific Ocean close to Fiji and Tonga but there have been many others, including a M7.3 earthquake in Venezuela, a M6.6 earthquake in Vanuatu and a deadly M6.9 earthquake in Lombok, Indonesia.

Seismologists believe that the unsettling of the Ring of Fire could lead to a catastrophic earthquake somewhere around the globe, and California or the Cascadia fault along the US west coast have been touted as possible epicenters.

Experts have been warning for some time that California is overdue a large earthquake, and shaking around the Ring of Fire could be a precursor to this.

California overdue for a large earthquake

Thomas Jordan, head of the Southern California Earthquake Center, told the Los Angeles Times last year, that any time there is seismic activity on a fault zone, “the probability of having a large earthquake goes up.”

The last time there was a magnitude seven quake or higher in California was in 1906 which struck San Francisco and ultimately killed around 3,000 people. But Prof Aster says the damage this time could be much worse as California’s population has grown more than 20-fold since the 1906 earthquake and currently is close to 40 million. As you understand, there could be serious devastation.

Cascadia overdue for a big earthquake

Experts fear a mega-tsunami could be headed to the west coast in the near future as the fault is ‘overdue’ for the big one. According to specialists, this earthquake will destroy a sizable portion of the coastal Northwest.

The question is when. The next full-margin rupture of the Cascadia subduction zone will spell the worst natural disaster in the history of the continent.

Nonetheless, the US West Coast’s infrastructure, response planning and general preparedness will doubtlessly be tested when the inevitable and long-delayed ‘big ones’ occur along the San Andreas Fault or the Cascadia Fault line systems. Ultimate damage and casualty levels are hard to project, and hinge on the severity of associated hazards such as landslides and fires. As California and other States along the Pacific up to Canada prepare for large earthquakes after a hiatus of more than a century, the clock is ticking.

Strange Sounds – The Really Big One: The next rupture of the Cascadia subduction zone will spell the worst natural disaster in the history of the continent
USGS – M 6.2 – 265km WNW of Bandon, Oregon
Express – California earthquake warning: 6.3 magnitude quake rocks US West Coast amid Big One fears 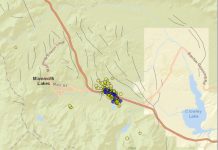 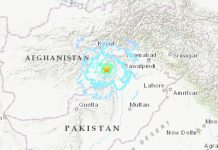 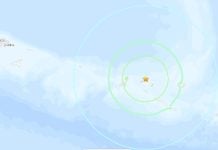 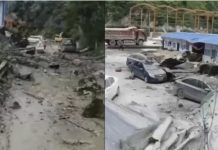 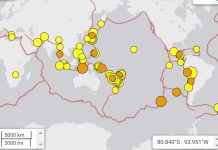