There is currently an enhanced earthquake activity around the world. Within 48 hours, more than 5 earthquakes larger than M6.0 have rattled the world, killing people and destroying infrastructures. In parallel, new volcanoes are erupting daily. Although they may be not related, such a geologic unrest is quite scary for people living in active and even less active regions. Be ready and if you aren’t already get prepared!

Within the last two weeks or so, the worldwide seismic activity makes the headlines, rattling and killing in different regions around the Ring of Fire… Since Yesterday, August 21, 2018, another two strong quakes have to be added to the growing list. One hit Venezuela and the Caribbean (M7.3 earthquake) and the other the Archipelago of Vanuatu (M6.6). 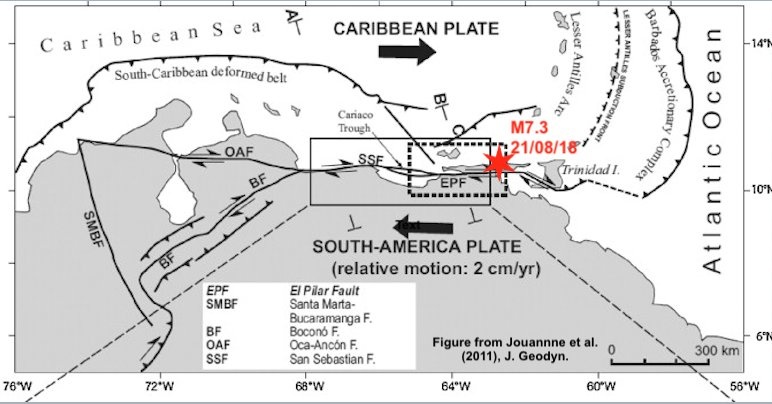 The South American plate begins its subduction under the Caribbean plate about 550 km east of today’s earthquake and reaches depths close to 150 km near this event.

The powerful quake was felt on the north coast of South America, in Colombia, and in the Caribbean arc up to Fort de France. – USGS

A few hours later, a M6.6 earthquake struck Vanuatu at a depth of 10 km about 195 km north of Port Vila, near Penama Island, east of the New Hebrides North Trench. The epicenter is situated in a seismically very active zone at the convergence of the Australian and Pacific plates. – USGS

And here some new volcanic eruption news from around the world:

Etna volcanic activity has been reported from three summit craters: the new southeast crater, the northeast crater, and the Bocca Nuova.

On August 21 at night, a strong incandescence is visible to the naked eye from the foothills. – Boris Behncke

A new “major explosion” was recorded on August 18, at 17:08 (local time), on the south-central zone in the terrace crater of Stromboli volcano by the National Institute of Geophysics and Volcanology (INGV).

The explosion produced a small cloud of ash, which dispersed rapidly, and ejected coarse pyroclastic material, that fell on the crater terrace and on top of the Sciara del Fuoco. The seismic signal associated with the event lasted a little more than 4 minutes. Subsequently, the volcano returned to its normal Strombolian activity. – INGV Catania

Gas and steam emiision is continuous and ongoing, but the aviation alert remains at the orange level. Ash explosions up to 16,400 ft (5 km) a.s.l. could occur at any time. Ongoing activity could affect low-flying aircraft and airport of Severo-Kurilsk. – KVERT

The seismicity of Anak Krakatau was particularly high on August 18, characterized by 578 eruption earthquakes, 80 emission / exhalation earthquakes. On August 19, the number of eruptions earthquakes decrased to 248, but that of emission increased to 118.

Geological faults and volcanoes are heating. Where will be the next Big One?