Multiple regions across Australia reported Thursday they had received more than a month’s rainfall in just 24 hours.

Relief is here for a number of firefighters working across NSW. Although this rain won’t extinguish all fires, it will certainly go a long way towards containment.

Amazing! Rain is now falling on Australia and more than ten communities across all three states currently burning in devastating fires, have received their best rainfall in years. That rain comes after one of the driest Decembers on record that prompted officials to cull thousands of feral camels.

Relief is here for a number of firefighters working across NSW. Although this rain won’t extinguish all fires, it will certainly go a long way towards containment. This footage was captured down at the Good Good Fire burning near Cooma. #nswrfs #nswfires pic.twitter.com/fxV9u2hN6K

The rain brings some relief to the drought-stricken country. Let’s hope some of the farmers are also getting some moisture.

Unbelievable – after the smoke haze that has engulfed our city some parts of Melbourne have received a month’s worth of rain in half an hour this afternoon @9NewsMelb pic.twitter.com/0klFgaQgRG

And that little boy couldn’t contain his excitement at seeing rain for the first time.

Some good falls have been reported across some firegrounds. But there are still 85 bush and grass fires burning across NSW alone but 30 were contained as reported by NSW Rural Fire Service.

As of 8:30am this morning, 85 bush and grass fires are burning across the state, with 30 to be contained. All fires are at Advice. We are starting to see some good falls across some firegrounds. Lets hope some of our farmers are also getting some moisture. #nswrfs #nswfires pic.twitter.com/JY5BXMZnSh

As shown in the below map, around 10,000 lightning struck across the Hunter this afternoon, causing power outages:

This map from Weatherzone shows the impact of around 10,000 lightning strikes across the Hunter this afternoon

Weather forecasters say the rain will continue into the weekend, bringing more than four inches of rain to some areas.

However, it is hard to predict where the rain will fall.

The hit & miss nature of #thunderstorms means it's difficult to forecast exactly where the heaviest rain will be—some parts of #bushfire & #drought affected eastern Australia could see 50–100 mm over the next few days; while others may see very little https://t.co/T7MYuIdxkO pic.twitter.com/zgmiBmqcIG

Meanwhile, smoke from the Australian fires are carrying smoke around the world.

The bushfires in Australia have killed more than two dozen people and numerous homes have been destroyed. According to a conservation group estimates, 1.25 billion wild animals have perished in the unprecedented fire crisis. Similar headlines on Strange Sounds and Steve Quayle [WKYC] 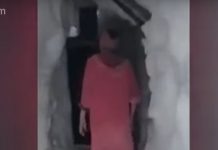 There is so Much Snow in Kazakhstan Right Now That People Dig Tunnels to Enter Their Homes, Leave Their Cars Stranded on Highways and...