A still-developing winter storm is set to become a major nor’easter that will bombard New England with heavy snow and blizzard conditions this weekend.

Winter storm watches were issued for portions of eastern Massachusetts, eastern Connecticut and Rhode Island on Wednesday in anticipation of some of the worst conditions from the storm.

The watches will go into effect at 12 a.m. on Saturday. Areas farther south in the mid-Atlantic will not escape the storm as several inches of snow and major travel disruptions are expected.

“The area that we think will be hit the hardest and will be at risk for closures will be central and eastern Long Island to New England,” AccuWeather Chief On-Air Meteorologist Bernie Rayno said.

AccuWeather forecasters were growing more confident on Wednesday that southern New England will face the most significant impacts and that snow totals could reach or exceed a foot.

“This is going to be an intensifying storm that will produce a lot of wind, which raises concerns for blowing and drifting snow, power outages and blizzard conditions in some areas,” AccuWeather Chief Meteorologist Jonathan Porter said. “There is also a serious coastal flooding and beach erosion threat, especially in eastern Massachusetts.” 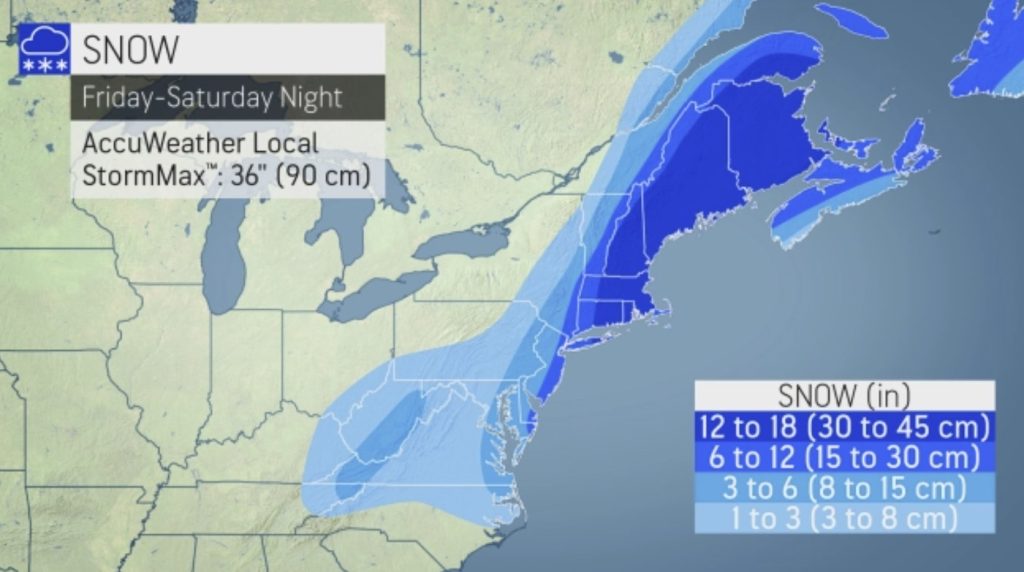 The storm, which will develop off the coast of the Carolinas late this week, could rapidly strengthen enough as it moves northward along the East Coast into the weekend to be dubbed a bomb cyclone. A bomb cyclone, or bombogenesis, occurs when the central pressure of a storm crashes by 0.71 of an inch (24 millibars) or more within 24 hours. The plunging pressure will cause air to rush into the center of the storm — just like a giant vacuum. The high winds will pull in copious amounts of moisture, helping to enhance precipitation.

The combination of winds frequenting 40 mph or greater along with heavy snow will reduce the visibility to 1/4 of a mile or less for several hours, triggering blizzard conditions in portions of New England.

Snow accumulations of 12 to 18 inches, with an AccuWeather Local StormMax™ of 36 inches, are predicted to occur in the stretch that spans Boston and Worcester, Massachusetts; Islip, New York; Providence, Rhode Island; Hartford and Groton, Connecticut; Portsmouth and Manchester, New Hampshire; and Portland and Bangor, Maine. 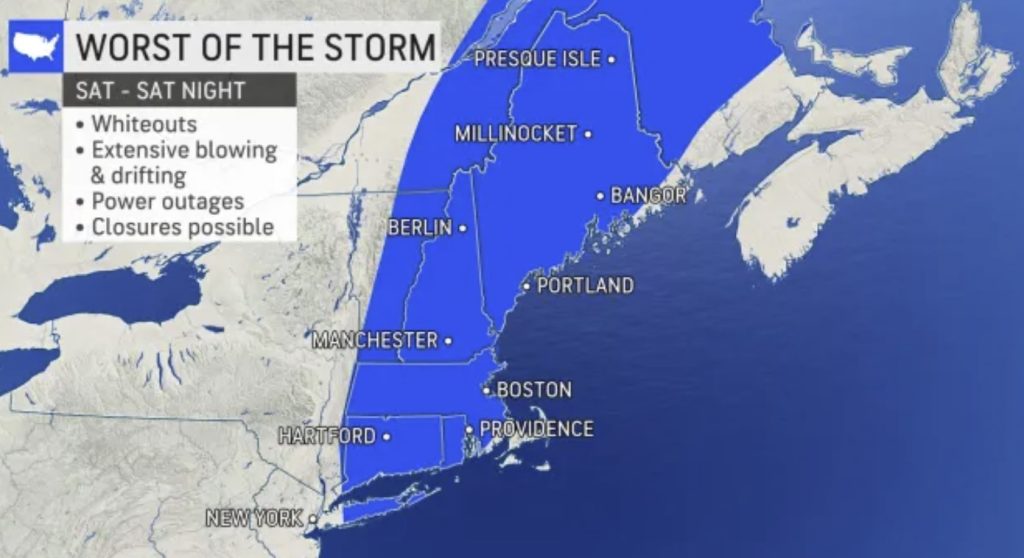 “Farther to the south and west in the mid-Atlantic, a threat of heavy snow exists in New York City and Philadelphia and perhaps as far inland as Baltimore and Washington, D.C.,” Porter said, explaining that “the scope of the western and northern extent of the heavy snow and blizzard conditions is highly dependent on the track and intensity of the storm, which can potentially cause big differences in impacts.”

The snow will be heavy enough to shovel and plow in much of the Interstate-95 corridor from Virginia to the New York City area, leading to slippery and slow travel with the risk of accidents and traffic standstills.

Should the storm jog as little as 50 miles farther to the west than currently projected, the 3- to 6-inch snow accumulations predicted in the zone from Philadelphia to Washington, D.C., and the 6-12 inches forecast from New York City to Ocean City, Maryland, could be doubled. However, if the opposite happens and the storm tracks 50 miles farther to the east, snowfall in these areas could be halved instead. 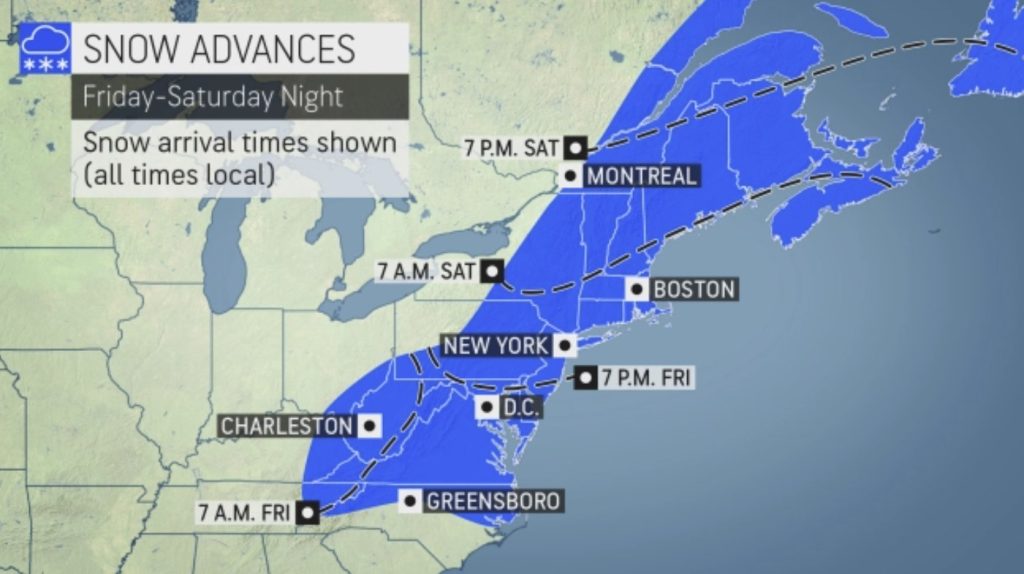 The sprawling New York City metro area, in particular, is likely to experience a wide range of accumulations. In northwestern New Jersey, a few inches of snow could fall, but areas in central Long Island, New York, will face over a foot of snow. Any small shift in the storm track to the east or west could mean the difference between a manageable snowfall or blizzard conditions in the five boroughs of the city.

The intense storm has the potential to shut down airports, such as Boston Logan International Airport, and could lead to scores of flight cancellations in New York City, Philadelphia and Washington, D.C., that can have ripple effects across the nation as crews and aircraft are displaced.

AccuWeather forecasters advise avoiding travel across much of New England during the storm on Saturday and Saturday night if it is avoidable. Heavy snow rates between 1 and 3 inches per hour along with extensive blowing and drifting snow will create extremely dangerous travel conditions. Snow drifts of several feet could occur in open areas. The storm is likely to maintain that intensity for a period of 8-12 hours, making it difficult to impossible for crews to keep up with roadways. Motorists who venture out could risk becoming stranded.

Farther to the south, parts of the Southeast and mid-Atlantic will be sideswiped by the big storm. Up to a few inches of snow can fall across portions of eastern North Carolina and southeastern Virginia that were hit by significant snow and ice this past weekend. Blowing and drifting of snow could also occur in the storm’s wake. 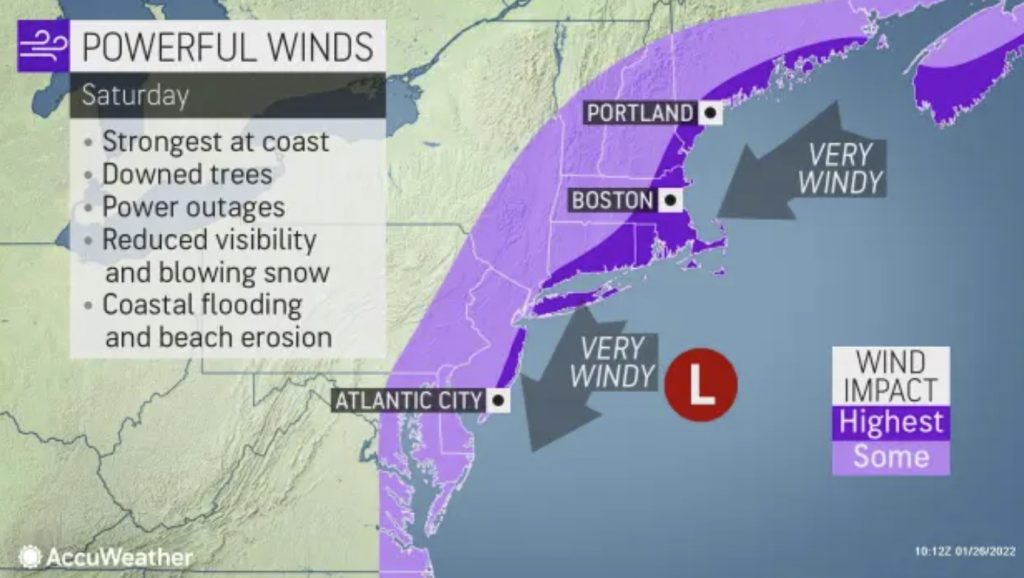 Should the storm strengthen to its maximum potential, hurricane-force winds of 74 mph or greater could be felt in southeastern New England, causing power outages.

“Roads prone to flooding during nor’easters along the coast in eastern Massachusetts and along the north shore of Long Island are likely to be inundated with significant overwash from this storm,” AccuWeather Senior Meteorologist Brett Anderson said. The combination of the astronomical effects of the new moon this weekend can make the high tides early Saturday morning and Saturday evening most problematic. Moderate coastal flooding is anticipated from New Jersey to eastern New England with a storm surge averaging 2-3 feet.

Farther west over central New England and along the mid-Atlantic coast, the dry, powdery nature of the snow will not adhere to tree limbs. However, winds can still be strong enough to cause sporadic power outages with gusts topping 40 mph at times on Saturday. 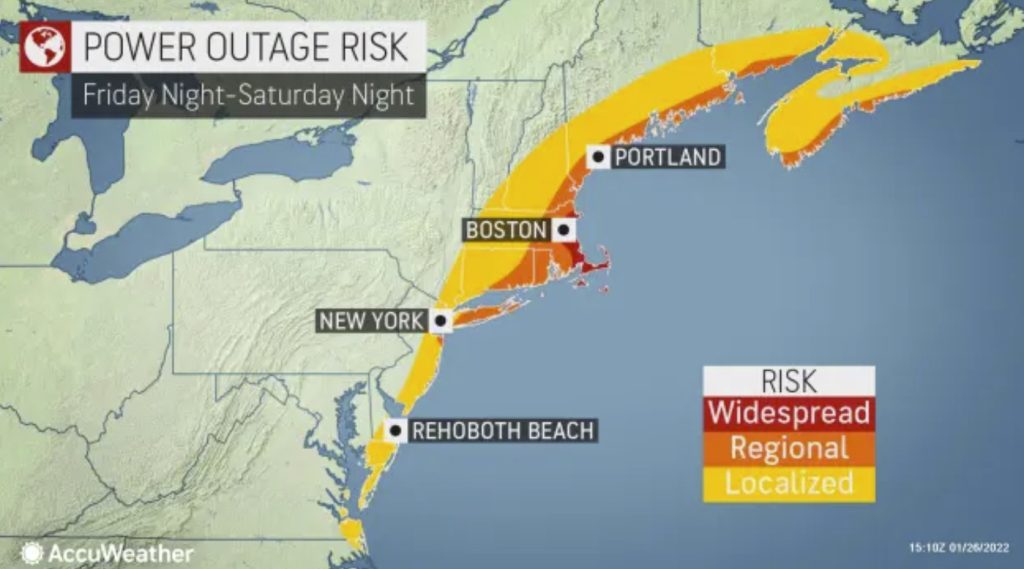 Preceding the snowstorm will be intermittent snow and flurries on Friday from parts of the central Appalachians to the mid-Atlantic and New England as a press of Arctic air arrives from Canada.

“Due to limited moisture available for this event, accumulations are likely to be light, but as we have seen in the past, even a quick coating of snow can make for hazardous conditions on the highways,” AccuWeather Senior Storm Warning Meteorologist Brian Wimer said.

A general coating to an inch of snow is forecast with a few spots picking up a bit more. In much of the zone from central Virginia to central Pennsylvania, central and northern New York state and northwestern New England, it will be snow associated with a cold front on Friday that is more likely to bring an accumulation as opposed to the nor’easter from Friday night to Saturday. 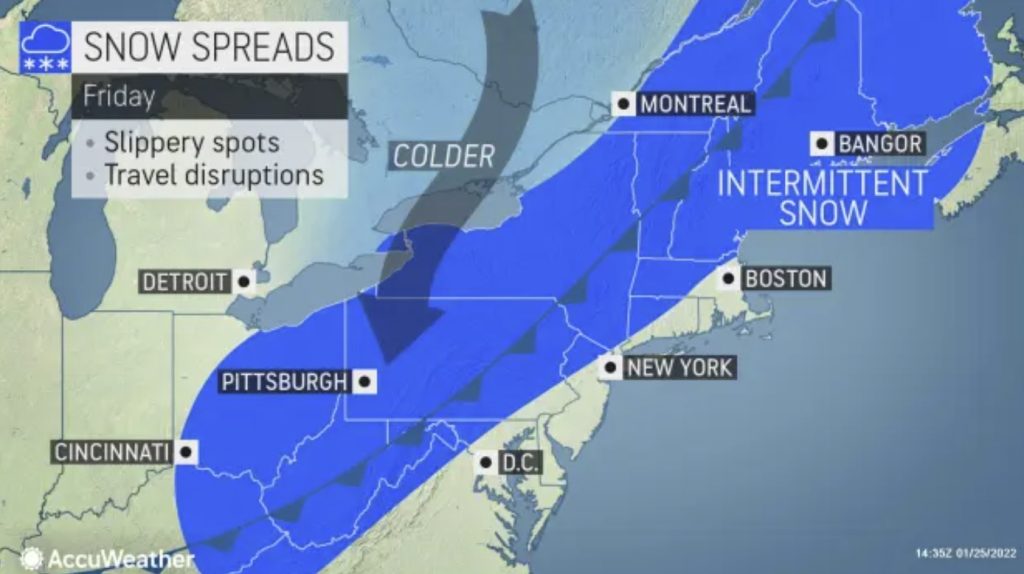 Winds on the backside of the nor’easter will usher Arctic air throughout New England, the central Appalachians, the mid-Atlantic, the Midwest and Southeast regions.

Even portions of the Florida Peninsula will be affected with the risk of a damaging freeze for agriculture in the region.

Any wet and slushy areas created by the storm in the mid-Atlantic and New England could freeze on Saturday night and Sunday night. [Accuweather]