We are in winter, I know. But the current unprecedented frigid weather events are just out of normal! Tahoe has recently set a new December snowfall record with nearly 18 feet of powder – the most in 142 years! Hundreds are currently stranded on I-95 in Virginia for more than 15 hours, and they’re running out of fuel, food, and water in frigid conditions.

This ice breaker boat assistance took place 3 weeks ago on the St-Lawrence River in Quebec:

Operation Taconite is the Coast Guard’s largest domestic ice-breaking operation. The operation encompasses Lake Superior, St. Marys River, the Straits of Mackinac, Georgian Bay, and all of Lake Michigan. Various commercial waterways may close after due consideration is given to the protection of the marine environment, the need for cross-channel traffic, such as ferries, and the safety of the island residents; who in the course of their daily business use naturally formed ice bridges for transportation to and from the mainland.

The implementation of Operation Taconite places additional movement criteria on commercial ships plying the Western Lakes, St. Marys River, and the Straits of Mackinac. These measures may include restricting tanker transits to daylight in the presence of ice, reducing speeds by 2 mph in specified locations to reduce incidental ice breaking, and requiring additional voice and position reporting points throughout the operation’s area of responsibility.

The Coast Guard recommends all recreational ice users plan their activities carefully, dress appropriately, use caution on the ice, and stay away from shipping channels. Recreational users and island residents should stay tuned to local media resources for the status of regional waterway closures.

According to the captain of an icy ship that recently docked in Russia, this story all started with unusually strong winds and low December temperatures.

The vessel was a cargo ship carrying some very valuable freight docking in Russia after traveling from Japan.

At first, the frozen freighter appeared as a ghostly dot on the horizon, but as it drew closer to the port in Vladivostok, Russia, during the final days of December 2021, a crowd began to gather around the ironically named Sun Rio, a ship that is registered in Panama. The huge ship, along with all of its cargo, was completely encased in a thick coat of ice.

“It’s December, and the sea is rough and windy. Seawater splashes onboard and turns into a thick [ice] crust. This year winds are much stronger than usual,” 72-year-old Pyotr Osichansky, the ship’s captain, said of what caused the spectacle.

Many people came out to watch the incredible sight of cars, which were all but unrecognizable encased in ice, being lifted from the Sun Rio. “The cars are so caked in ice you can’t tell the type of vehicle,” remarked one onlooker. Some were coated in ice up to 6 inches thick. As the Daily Mail noted, “vehicles had to be hoisted off the deck by a crane in temperatures of 2 degrees Fahrenheit below zero.”

Drone footage showed the Sun Rio covered in ice that glistened in the sunshine, a stark contrast to some of the other vessels that hadn’t encountered such harsh winter conditions docked in Vladivostok, a port city in far eastern Russia near the borders with China and North Korea on the Golden Horn Bay.

According to a report, ship icing can be deadly: “For generations, sailors have feared marine icing, or ‘white mist,’ as it is called.” Pounding waves “accompanied by gale-force winds, sheets of spray and suddenly plunging temperatures can be a deadly combination. Without warning, layer upon layer of ice forms relentlessly on anything touched by the spray, rapidly coating the vessel with thick sheets of ice that reduce maneuverability and threaten its stability.”

Captain O sichansky, however, seemed unfazed and said everything was shipshape. 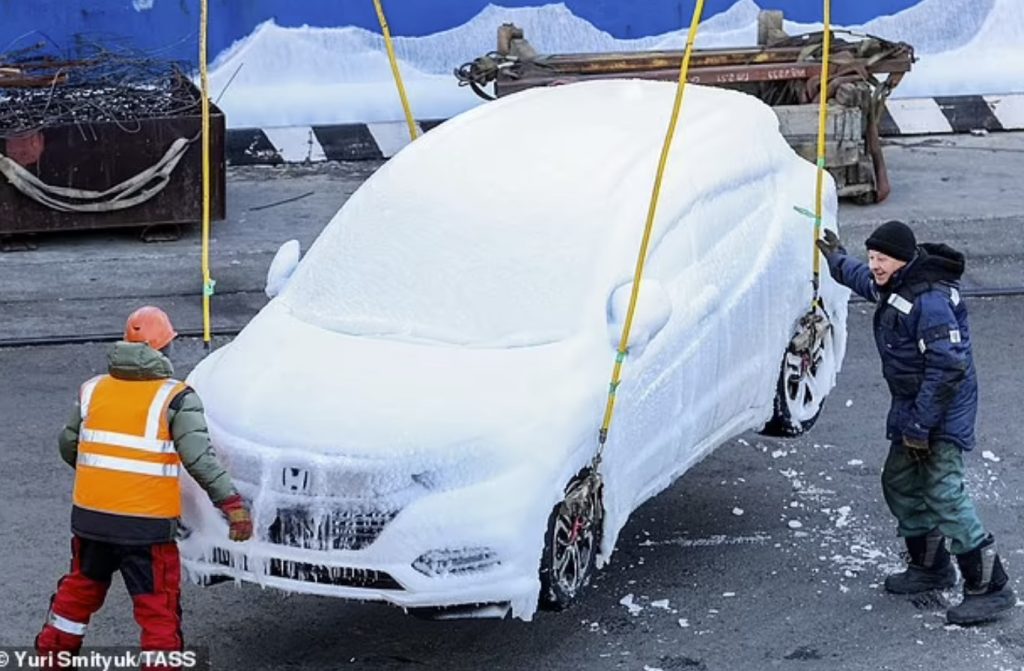 “It’s December, the sea is rough and windy. Water splashes on board, it turns into a crust,” he said, adding that it was nothing his crew shouldn’t be able to handle. “Unless this year the winds are much stronger than usual. But sailors are no strangers to these types of conditions,” Osichansky continued, noting that something similar has happened before “and it was OK.” [NewsVL, EOLSS, DailyMail]