When a volcano exploded out of the Pacific Ocean near Tonga on Jan. 15th, scientists immediately realized they were witnessing something special. Little did they know how special.

A new analysis of images from Earth-orbiting satellites shows that the plume punched a hole in our atmosphere all the way up to the mesosphere.

“The intensity of this event far exceeds that of any storm cloud I have ever studied,” said Kristopher Bedka, an atmospheric scientist at NASA Langley who specializes in studying extreme storms.

Bedka and colleagues combined images from two satellites: NOAA’s GOES-17 and Japan’s Himawari-8, both of which observed the eruption using similar infrared cameras from different points in geosynchronous orbit. Using the simple math of stereo geometry, the team calculated that the plume rose to 58 kilometers (36 miles) at its highest point. 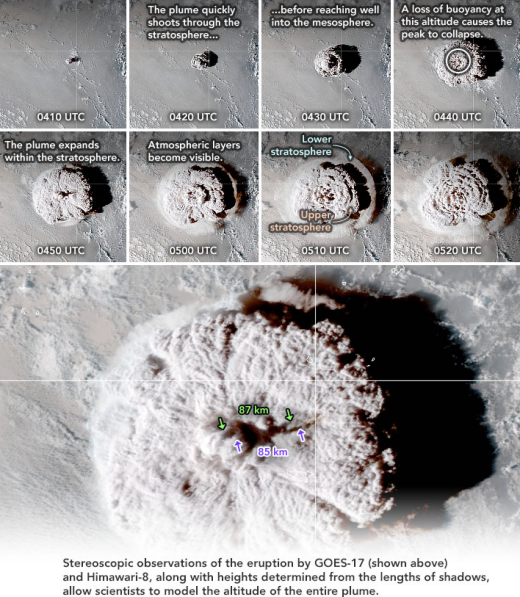 For comparison, the largest known volcanic plume in the satellite era before Tonga came from Mount Pinatubo, which spewed ash and aerosols up to 35 kilometers (22 miles) into the air above the Philippines in 1991. The Tonga plume was 1.5 times the height of Pinatubo.

The extreme height of the Tonga plume means it could affect space weather phenomena such as sprites, airglow, and noctilucent clouds, which also occur in the mesosphere. Tonga was truly out of this world.

A month and a half after the Tonga volcano erupted, southern hemisphere sky watchers are still seeing unusual sunsets. Helio C. Vital took this picture from Rio de Janeiro, Brazil, on Feb. 26th: 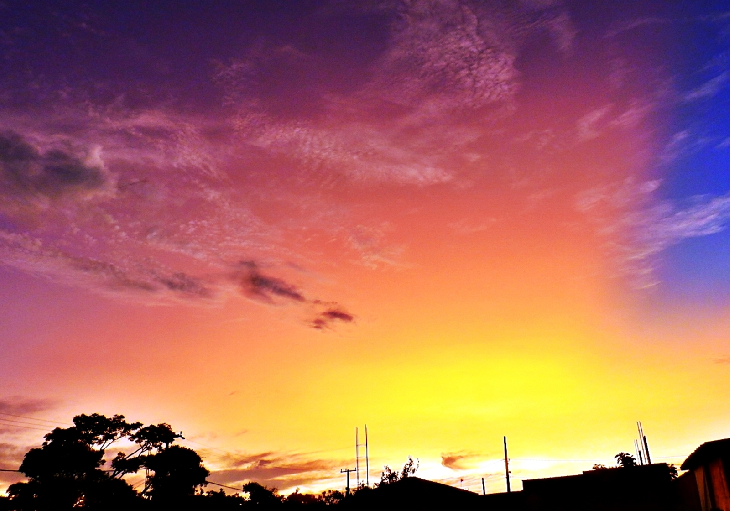 “This spectacular sunset was possibly caused by the return of the plumes of aerosols launched into the high atmosphere by Tonga,” says Vital, who has seen several episodes of colorful sunsets since the eruption. “Their timing is consistent with a 2-week circumnavigation period at Rio’s latitude.”

Aerosols from the volcano’s plume have persisted in the stratosphere for more than a month after the eruption and could stay for a year or more, according to atmospheric scientist Ghassan Taha of the Goddard Space Flight Center.

More Tonga sunsets: from Fabiano B. Diniz of Pontal do Paraná, Brazil; from Cassiano Macedo of Sao Paulo, Brazil; from Peter Lowenstein of Mutare, Zimbabwe; from Daniele Gasparri of Atacama, Chile; from Ray Pickard of the Bathurst Observatory, NSW Australia; from Tara Williams of Pottsville NSW Australia;

The blood red sky pictured in South Africa a few days ago, was also maybe related to the devastating eruption.

What do you think?