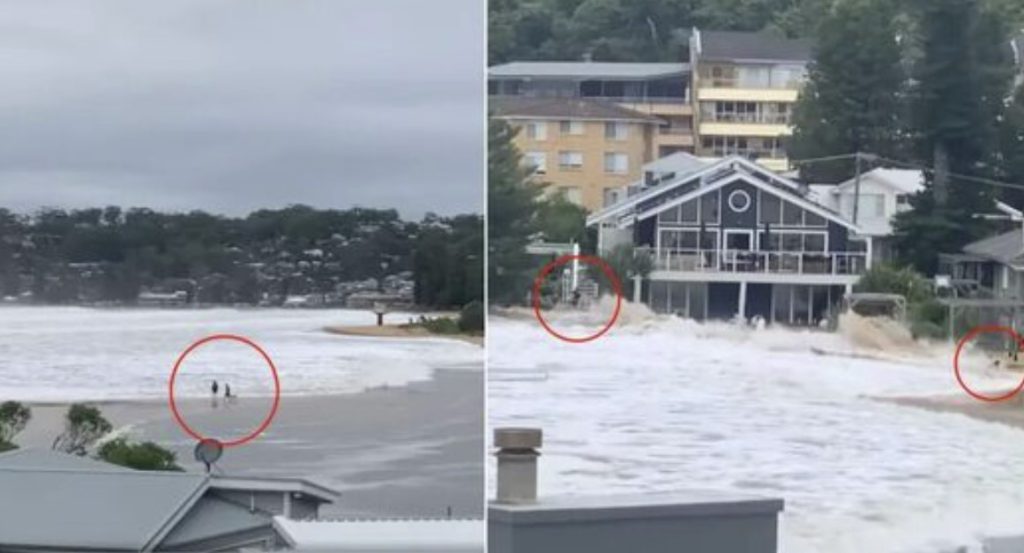 The New South Wales coastline has copped a lashing this weekend with monstrous waves swallowing beaches and wiping out footpaths.

Wild footage taken at Avoca Beach, north of Sydney, on Saturday demonstrated their power as the huge tide thrashed the sand, wiping out two dog walkers.

Two people can be seen walking on the beach before being knocked down and swept up in the swell.

The force of the tide continued to whip across parklands and paths that lined North Avoca beach, with people seen running for safety.

Onlookers compared it to a “mini tsunami”, while others said it’s the “worst we’ve seen”.

Meanwhile, Wanda beach in Sydney’s South vanished under the tide on Saturday as some brave locals attempted to utilise the small stretch of beach that remained.

Photos shared on a Sutherland Shire Facebook group show the waves smashing the coastline, with almost the entire stretch of sand underwater.

Bondi and Clovelly beaches were flooded over as waves battered the walls of the beachside Coogee Surf Club.

Boats were ripped from their moorings inside the harbour at Manly Wharf, with some vessels washing up on nearby beaches.

A sailing vessel was spotted capsized at Bronte beach with emergency services launching a search for potentially missing crew.

But the search was cancelled after the boat’s owner came forward to say it had been ripped from its dock at Gordons Bay due to the heavy seas.

A hazardous surf warning remains in place for the NSW coast with the Bureau of Meteorology saying it’s likely to stick around until Monday.

But conditions are continuing to ease across Sydney after huge gusts of wind swept the city, including one of 74 km/h on Friday.

The weather system is currently tracking south with the BOM issuing a severe weather warning for parts of the Snowy Mountains and South Coast on Sunday.

The South Coast is expected to experience heavy rain with a risk of flash-flooding in the area, but conditions are expected to ease by Monday. [Yahoo]