In the Klamath National Forest in Northern California, where the McKinney Fire has killed four people, residents have been confronted by a raging inferno and flooding rain. Heavy rains helped slow the growth of the fire but triggered flooding in parts of the burned area.

On Tuesday night, slow-moving severe thunderstorms unleashed downpours near the McKinney Fire, which has consumed more than 57,000 acres and is California’s largest fire of 2022.

The heavy rains helped slow the growth of the blaze but triggered flooding and mudslides in parts of the burned area.

The National Weather Service office in Medford, Ore., reported mud and debris on some area roads and flash flooding on the eastern side of the fire. It also issued a severe thunderstorm warning and a flash flood warning for Siskiyou County.

The Siskiyou County sheriff reported a possible mudflow on Whitney Creek near Mount Shasta and urged residents to be ready to evacuate.

As barren ground absorbs less water and rainwater can easily pick up soil and sediments, charred areas are especially prone to debris flows and mudslides.

Here’s some exclusive video, that I just received from a source who wished to be “unnamed”, of what firefighters near the #McKinneyFire were having to deal with yesterday with all the debris flows from rain 🤯🤯. #weather #Rain pic.twitter.com/0TGYVUsjER

On Wednesday, fire behavior analyst Dennis Burns reported that some areas affected by the fire received as much as three inches of rain in just over an hour, leading to debris flows that compromised roads in the fire zone. “But other parts of the fire got no rain whatsoever,” Burns said.

GOLD; SILVER; It’s time to learn how to invest in PRECIOUS METALS to achieve the retirement peace of mind you deserve…

The McKinney Fire exploded Friday into Saturday near the town of Yreka, destroying structures and claiming at least four lives. Although officials do not think lightning sparked the fire, its growth was driven by erratic thunderstorm winds and fueled by high temperatures combined with dense, drought-stressed vegetation in the Klamath National Forest.

Given moist conditions early this week, some progress is expected in the coming days on the McKinney Fire (57,500 acres) and the nearby Yeti Fire (2,980 acres), both of which so far have no containment.

The rapid spread of the McKinney Fire notwithstanding, the fire situation in the Pacific Northwest and Northern California could have been worse. 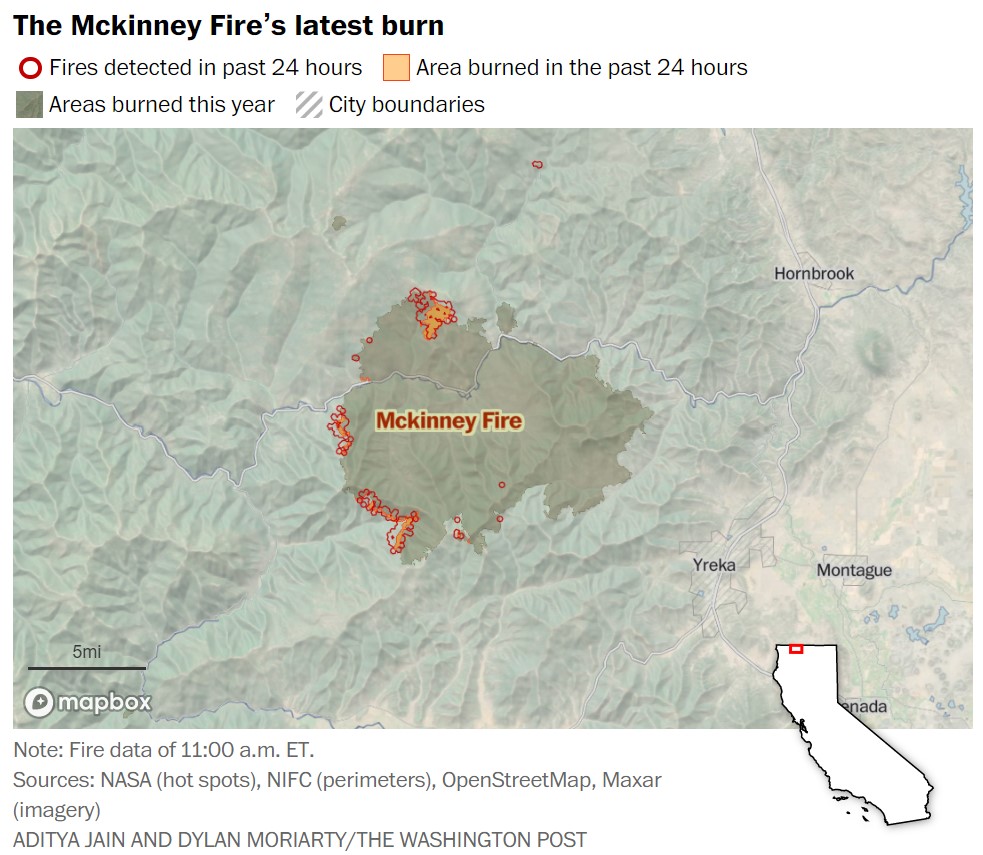 Meteorologists had been bracing for a weather system with the potential to spark fast-moving fires in vegetation that was tinder-dry after record-breaking heat.

“We had been worried that the passage of an upper trough would bring lightning and winds all at the same time, which is an ugly circumstance,” said John Saltenberger, the fire weather program manager for the Northwest Interagency Coordination Center in Portland, Ore. “But it didn’t come to pass.”

Instead, that system remains off the coast, allowing moisture from the Southwest monsoon to continue to stream northward and trigger thunderstorms.

Thousands of lightning strikes have peppered California and Oregon over the past few days, although it remains unclear whether enough rain has fallen to prevent new wildfires. The National Weather Service in Medford noted that some lightning strikes were observed outside of rain cores, and there have been reports of small lightning fires in Northern California and Oregon. New fires could emerge in the coming days during windy weather.

“We’re going into a warmer, drier period, so we expect to see the activity increase pretty significantly today through tomorrow,” Burns said Wednesday.

These 3,577 strikes represent about five percent of the average number of lightning strikes (67,723) we receive in the Northwest each year.

Saltenberger said the summer fire season in the Pacific Northwest had been much quieter than expected, given the entrenched drought conditions — roughly half of Oregon is in severe drought or worse, according to the latest U.S. Drought Monitor map.

“We still have all of August and half of September to contend with. We’re just at a relative respite at the moment,” he said.

A robust Southwest monsoon has helped to ease fire risk across several Western states, but fire activity has been increasing in Northern California, the Pacific Northwest and in the Northern Rockies, which lie on the periphery of monsoonal surges and tend to receive drier and more sporadic storms.

In the past week, wildfires in Idaho, Montana, Wyoming and western Nebraska have forced evacuations and threatened or destroyed structures. [WP]