Our ecosystem collapsing before our eyes isn’t being talked about enough! Actually, it seems that the government is covering up the  large infrastructure problems Americans are facing and prefer spending the much needed taxpayers’ money (that should actually pay for improving the life of US citizen) for proxy wars in other countries… Shame on you!

In the latest infrastructure collapse and health emergency news: State Health Officer Dr. Daniel Edney is urging Jackson residents to conserve their water resources and to boil their water for three minutes before using it to drink, brush teeth, or cook. 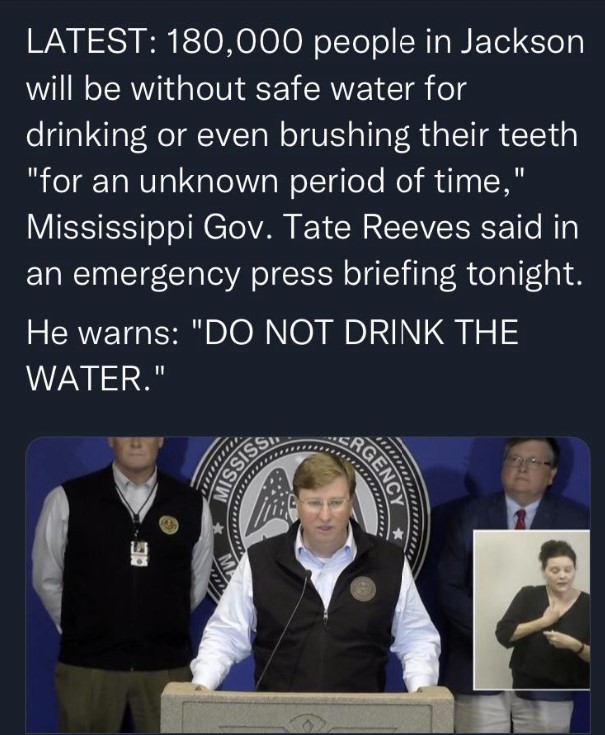 The drinking water system in Jackson — Mississippi’s largest city and home to more than 180,000 residents — is failing, state officials announced on Monday. Thousands of Jackson residents already have no or little water pressure, and officials cannot say when adequate, reliable service will be restored.

The city water system has been plagued with problems for years, including tens of thousands of residents losing water between one and three weeks during a 2021 winter storm.

At a press conference Monday night, Gov. Tate Reeves said the city’s largest water treatment plants may be completely down.

“The O.B. Curtis plant is not operating anywhere near full capacity,” Reeves said. “We may find out tomorrow it’s not operating at all. We’ll have better visibility on that when we get in there tomorrow.”

Reeves announced he would sign an emergency declaration for the capital city’s water system and create an “incident command center” to distribute water to the city’s residents beginning Tuesday morning.

“Until it is fixed, it means we do not have reliable running water at scale,” Reeves said. “It means the city cannot produce enough water to fight fires, to reliably flush toilets, and to meet other critical needs.”

When Reeves announced the system was failing Monday at 7 p.m., Jackson leaders, including Mayor Chokwe Antar Lumumba, had not addressed the public about the failure of the water system. Lumumba did declare a “water system emergency” Monday around 6 p.m., saying in a statement the “water shortage is likely to last the next couple of days.”

Lumumba was not invited by Reeves to attend the Monday evening press conference. While Reeves said he had not spoken directly with the mayor, he did say the city leader had agreed to work with state officials to address the problem. Employees with the Mississippi State Department of Health will be working Tuesday with city operators to try to get the plant back on line.

“The operators (of the O.B. Curtis facility) have been heroic, just not enough of them,” Reeves said, adding the city employees will be crucial to get the plant running again.

State Health Officer Dr. Daniel Edney urged Jackson residents to “husband their water resources,” and to boil their water for three minutes before using it to drink, brush teeth, or cook.

Reeves revealed that he became aware of the possibility that O.B. Curtis could fail completely on Friday. State health officials told him that the city was relying on backup pumps because the main pumps had been “damaged severely” around the time the current boil water notice went into place on July 29.

“We were told on Friday that there was no way to predict exactly when, but that it was a near certainty that Jackson would begin to fail to produce running water sometime in the next several weeks or months if something didn’t materially improve,” Reeves said. “We began preparing for a scenario where Jackson would be without running water for an extended period.”

The governor said his team began coming up with a water distribution plan over the weekend.

“All of this was with the prayer that we would have more time before their system ran to failure,” Reeves said. “Unfortunately that failure appears to have begun today.”

On Tuesday, an incident command center will be set up and state employees will go into the O.B. Curtis Water Treatment Plant to try to restore it to full operation. The plant has been operating at partial capacity for a number of days, Reeves said. For more than a month, the city has been under a state health department-issued boil water notice, but on Monday because of the problems with the plant much of Jackson lost water pressure.

Reeves said the first goal is to restore water quantity so that people can flush toilets and take a shower and then to restore quality to end the boil water notice.

As a short-term plan, Reeves said the state will cashflow emergency improvements, maintenance and repairs, which will include contracting operators to assist at the treatment plant. He said Mayor Lumumba agreed to a plan where the city would be responsible for half of the cost of the operation.

Back in March 2021, three weeks after winter storms and freezing weather, residents of Jackson, Mississippi were still being warned to boil any water that came out of their faucets. Some even did not have water at home! Remember:

“We will come up with a solution that will be great for the city of Jackson,” said Mississippi Emergency Management Agency executive director Stephen McCraney. The governor, though, did not address long-term plans involving possible legislation to earmark state funds to provide a long-term fix for the troubled water system.

McCraney added that Hinds County Emergency Management Agency had secured water for potential firefighting needs and that the state would be bringing in both water for drinking and for other sanitary needs.

It seems to me that residents of Jackson, Mississippi are being targeted… Would like to know when they will change the complete water infrastructure… But wait a second, it seems that giving your money to Ukraine is more important right now… [Mississippi Today]

As the Dow Jones is sinking and the inflation is hiking it’s the right to invest in precious metals! Get FREE information about how to invest in GOLD, SILVER and other PRECIOUS METALS to limit the effects of inflation on your IRA/401K…