The Arctic sea ice, regarded as a sensitive indicator of changes in the climate, has fallen to 3.41 million sq km (1.32 million sq mi) a new low record since satellite data collection began. These results are quite surprising since the changes arrived more rapidly than actually predicted by computer models. 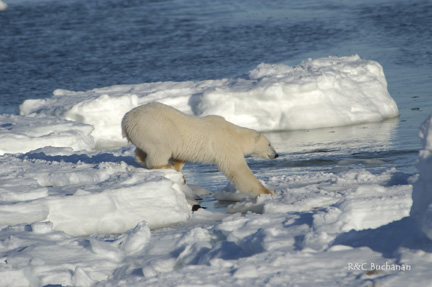 Very little is known about the consequences of drastic sea ice reductions. Less sea ice may lead to unusual warming of the Arctic atmosphere. This warming may affect wind patterns, surface ocean currents, the jet stream, weather patterns in the Northern hemisphere and thus may create persistent extreme weather such as droughts, heat waves and flooding.

The ice extent which is defined as the total area covered by at least 15% of ice has shown a dramatic overall decline over the past 30 years and changed from a multiyear ice (ice that survived through several years) to a seasonal ice cover during which large areas are encline to melting.

Sea ice melt creates new opportunities and challenges. While new trade routes can be created between the continents, the environment may suffer from the exploitation of raw materials supposed to be abundant in the Arctic Sea.