Researchers have discovered a new type of gravity wave, one that is shaped like a star. Such bizarre waves result from a property called nonlinearity, in which a small or simple change results in a disproportionately large or complex effect. This work is published in journal Physical Review Letters. 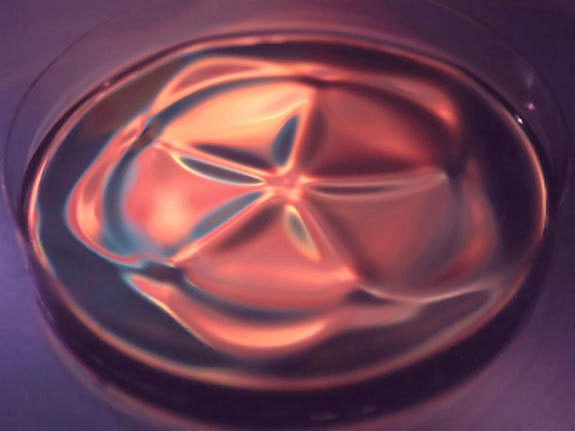 Star-shaped waves can form in vibrating tanks of liquid oil. Learning more about such bizarre waves could shed light on counterparts that may exist elsewhere in nature. Waves of all kinds often behave in an intuitively linear manner. For instance, a weight on a spring will bob up and down in a manner directly proportional to the force that the weight exerts on the spring. However, a number of strange waves can also form. They come from what is called nonlinearity, in which a small or simple change results in a disproportionately large or complex effect. For instance, aspects of weather behave chaotically, in a nonlinear manner. The waves seen on the surface of water also behave in a nonlinear manner, and bizarre phenomena can result, such as X- and Y-shaped ocean waves or monstrously large freak waves that seem to come out of nowhere. Scientists have spotted similar nonlinear effects elsewhere in nature, such as with super-cooled atoms or light traveling in fiber optics.

To uncover new, remarkable nonlinear waves, scientists experimented with circular and rectangular tanks containing about two-fifths of an inch (1 centimeter) of silicon oil. Researchers placed the tanks on shakers to vibrate the fluid. Scientists then observed that the liquid contained gravity waves — oscillations due to gravity pulling downward and vibrations pushing upward. A new type of gravity wave eventually resulted, which alternated in shape between stars and polygons — for instance, between a five-pointed star and a five-sided pentagon. The researchers could change the shapes of these stars and polygons by altering the strength and frequency of the vibrations. 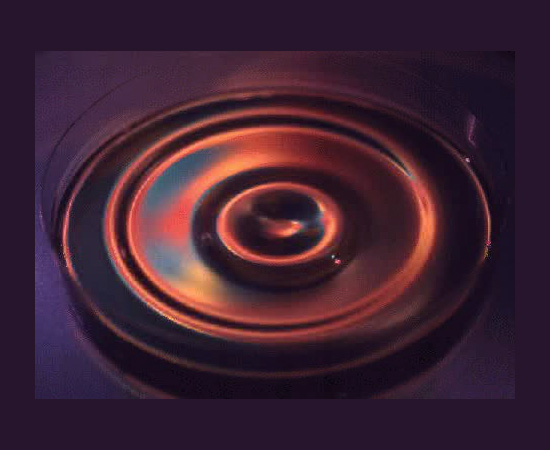 The gravity waves in the liquid interact in a nonlinear manner, resonating and building in complexity, somewhat like how a playground swing will climb higher from repeated pushes. This is the first time such nonlinear, resonant interactions have been seen with gravity waves. Intriguingly, the shapes of these waves did not depend on the form of the containers housing the fluid.

It is generally accepted that the shape of the waves depends on the container shape. The fact that the pattern shape is here recovered independently of the container shape is surprising, mysterious and stimulating. We have no clear explanation. This finding just emphasizes that the domain of highly nonlinear waves is still ‘terra incognita,’ or unknown territory. – Live Science 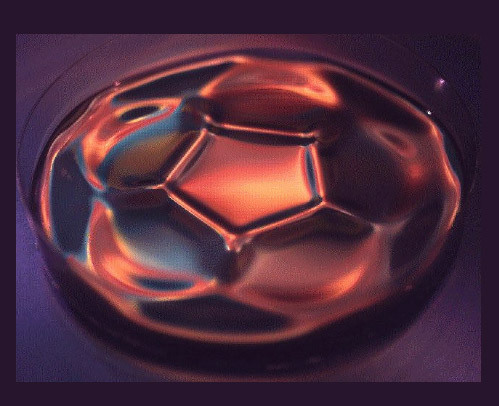