Those are questions that’ve been on many minds lately, following the INCREASING numbers of giant sinkholes forming in the US and around the world. 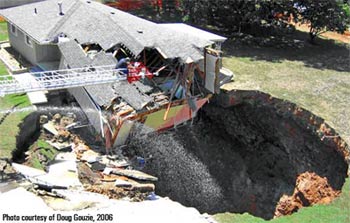 As the name suggests, sinkholes are naturally occurring holes in the surface of the earth. Sinkholes can form gradually or – in most cases – suddenly.

They form in areas where water flowing underground has dissolved rock – typically limestone – below the surface, leading to the formation of underground voids into which the surface sediment falls. They vary in size from 1 to 600 meters.

Sinkholes are found all over the world. In the U.S., sinkholes are especially common in Texas, Alabama, Missouri, Kentucky, Tennessee, Pennsylvania, and Florida.

Look at these US sinkhole maps.

Experts say that thousands of sinkholes form in Florida each year. There’s hardly a place in Florida that’s immune to sinkholes. In addition to sitting on highly porous limestone, the state has additional factors that can lead to the formation of sinkholes, including extreme weather and aquifer pumping.

In an effort to prevent injuries, deaths, and property losses caused by sinkholes, scientists have tested various methods of detecting the underground cavities that can lead to sinkholes. These include radar, seismography, and electrical resistivity testing.

Discover some of the most impressive sinkholes around the world.

You don’t have to be a scientist to be able to recognize certain signs that a sinkhole is about to open up. A brochure issued by the Southwest Florida Water Management District lists several sinkhole warning signs, including slumping trees or fence posts; the formation of small ponds in areas where water has not collected before; wilting of small, circular areas of vegetation; and structural cracks in walls.

But despite efforts to spot sinkholes before they occur, there are still plenty of unpleasant – and occasionally tragic – surprises. There’s no accurate way of ever predicting where a sinkhole is going to occur.