I missed this one, sorry! 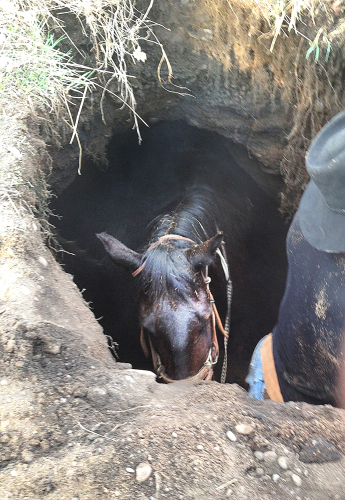 A horse was litterally swallowed by a 9- to 10-foot sinkhole on the Willard Munger State Trail as it was being ridden along an unpaved portion of a bike trail near Wrenshall on May 7 2013 at around 7 p.m..

The horse slowly sank into the ground as if she was in quicksand before disappearing completely beneath ground level.

The sinkhole probably originated during last June’s flooding. He said there was a culvert under the trail that may have had a hole ripped in it, or perhaps a washout formed around it. The freeze and thaw cycles of winter may have further compromised that portion of the trail, and the weight of the horse caused it to cave in. – Duluth News Tribune