Meteor sighting in Saskatchewan and Manitoba in Canada – May 23 2013 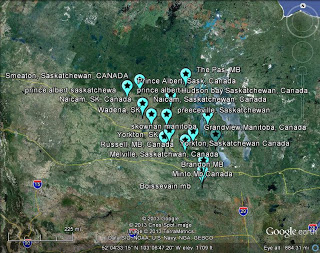 Initial Meteor Sighting Reports-
23MAY2013 Diane Rourke Boissevain mb 11:53 pm central 15 sec From west to north east Res fireball with yellowish white  bright light Very bright Not visibly Bright, lasted a long time, amazing23MAY2013 Charity Woods Grandview,Manitoba, Canada 23:50:00 Im not sure at least 20 seconds i lost site of it becuse of trees in the way appeared to be going west to east I was facing west white. no sound looked like a huge ball of fire I thought a plane was going down brighter then the moon, it is a full moon tonight yes no photo, it looked huge, and amazing23MAY2013 CK Yorkton,Saskatchewan Canada 2250hrs 30 sec. in clear sky WOW SW to NE travel Orange with long tail bright and large best meteor we’ve ever seen! very bright orange fire ball yes sparks from tail Best ever stellar event!

23MAY2013 Christi Fallows and Cameron Morrison NE of Yorkton, SK, Canada 22:51  central standard approx 10 to 15 seconds Facing N, travelled from west to east…compared to a clock face it would have started at 10 and ended at 3 bright red/orange glow, circle shaped in the front,with a long orange tail with a smokey looking trail behind it, no sound heard bright as a harvest moon couldn’t tell no photo, seemed to disappear behind the clouds but was still visible, waited outside for a couple minutes but didn’t hear or see anything else

23MAY2013 Carrie T Wadena, SK 22:50 central approximately 10 seconds. We were facing east in the sky. The meteor flew NE in the sky, right to left.  No sound, however bright orange tail. As it seemed to get closer in the sky, I could actually see it break and flare up again as it got lower into the atmosphere.  As bright as an orange flame in the sky. Yes, definitely a fair size chunk broke off. Almost looked like something was burning in the sky but wasn’t moving as fast as other meteors you normally see off in the distance. Was very bright orange and left a fairly long tail behind it. Broke off a bit and continued on north east. Not sure if it completely burnt up, or we just lost site of it because it went off too far in the distance.

23MAY2013 Gary Kreklewich Melville, Saskatchwan, Canada 22:45 Saskatchewan time zone About 20 seconds Southwest to Northeast like a comet, glowing very bright at times Very bright at times, fireball in the sky Saw a few parts break off towards the end creating smaller fireballs Wish I had a camera at the time.

Meteor report over Queensland Australia May 23 2013 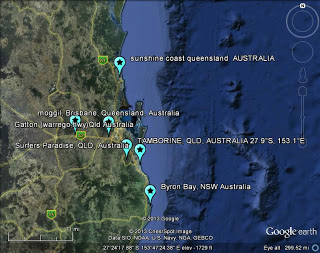 Initial Meteor Sighting Reports-
23MAY2013 ANDREW sunshine coast queensland AUSTRALIA 19.35 AUST EST 2 to 3 seconds realisticly facing NW came from SE heading NW appeared 1 oclock in the sky and everything disappeared at about 10 oclock in the sky greens and blues then orange and a faint but noticable boom about a minute later very bright , moon nearly full in eastern sky yes about 4 or 5 larger chunks as well as what looked like the usual ‘sparks but only in the last 1 second no just the first time of hereing a boom , this one was very large and i have witnessed many large ones ,a couple at day ,but this one is definatey the best and biggest23MAY2013 luke k moggil, Brisbane, Queensland, Australia approximate 19:30hrs 3 sec E-W, right to left, facing north blue trails following scattering chucks, then orange flame explosion bright as venus yes multiple trailing looked pretty amazing, very short lived but colourful explosion23MAY2013 Corbet TAMBORINE,QLD,AUSTRALIA 27.9°S, 153.1°E 1935 GMT+10 (AUST EST) 2 – 3 seconds starting about 45 deg above north horizon, travelling to the north white very bright but not as bright as the nearly full moon single fireball with a tail nil 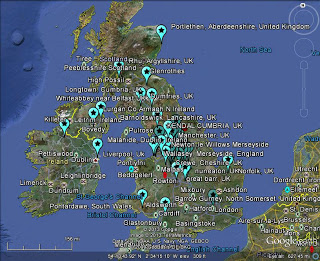