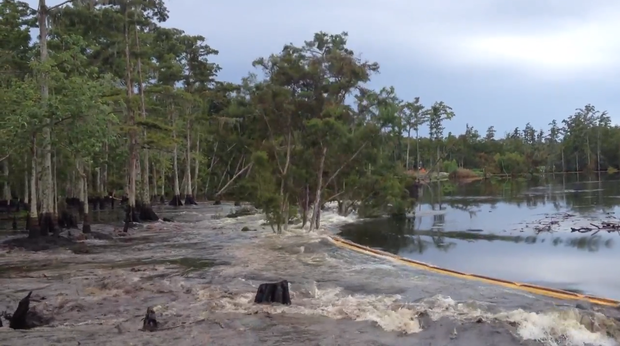 This amazing video shows the Louisiana sinkhole swallowing trees in second! A nightmare!

Assumption Parish officials on Wednesday released a video showing the sinkhole swallowing several trees in a matter of seconds.

The video, posted on the city’s blog, is described a “slough in” that happened around 7:15 p.m. Wednesday.

The collapse comes a little more than a year after an area around Bayou Corne dissolved into liquefied muck. The sinkhole, discovered Aug. 3, 2012, has grown to 24 acres, and 350 residents in the tiny community have no end in sight to their evacuation order because the hole continues to widen.

For more and lots of hard to find news on the big La sinkhole of 2012 go to the Louisiana Sinkhole Bugle!