As the calendar turns to a new month, sky-watchers get a chance to see not only a sprinkling of shooting stars and some ghostly glows, but also a distant gas giant in its best appearance of 2013. 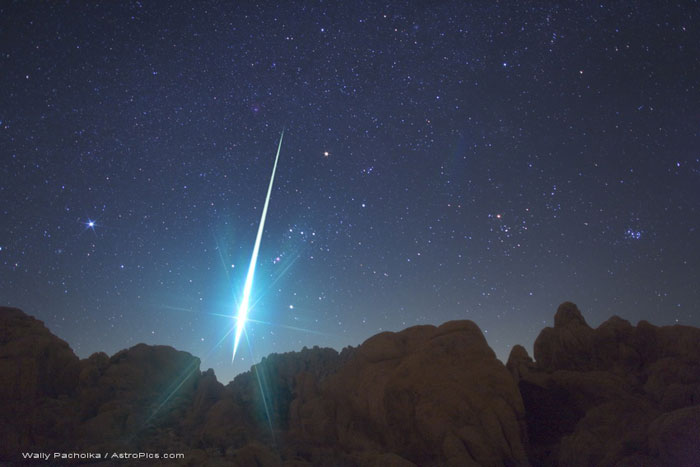 Comet ISON (C/2012 S1) will fly by Mars in the predawn skies on Tuesday, October 1, 2013, appearing only 2 degrees apart from the planet (width of your thumb at an arm’s length). But 6.7 million miles (10.8 million kilometers) will separate the comet from the planet during today’s close encounter. So you will need good glasses! Check out spaceweather.com’s growing ISON photo gallery from contributing backyard sky-hounds. This Mars event, though, as cool as it is, is just a warm-up for another, much closer encounter with comet Siding-Springs slated to occur in late 2014.

The annual Orionid meteor shower begins Wednesday, October 2, 2013, peaking on October 21 and ending on November 7. However, full moon will be at peak time, so it’s best to look for the shower before then. Rates at peak time generally hover around 20 meteors per hour, so expect much more modest rates of no more than 10 per hour over the next couple of weeks.

On Thursday, October 3, the seventh planet in the solar system, Uranus, will be at official opposition, meaning that the outer planet will be at its biggest and brightest in the sky for 2013. The green ice giant will appear opposite in the sky from the sun, rising in the east after sunset in the constellation Pisces, to the far lower left of the Circlet asterism.

Imagina watching at billions of dust-sized particles that were left behind after the planets formed about 5 billion years ago. Observation of so-called Zodiacal light will be possible at about an hour before sunrise on Thursday, October 3, and for the next two weeks in the Northern Hemisphere. This pyramid-shaped beam of light is caused by sunlight reflecting off cosmic dust between the planets.

After sunset on Sunday, October 6, look toward the very low southwestern horizon for a razor-thin crescent moon sandwiched between Saturn above and Mercury below. To catch the cosmic trio, it is best to find a location with an unobstructed view of the southwest horizon and use binoculars to scan the sky.

The more southerly your location, the higher in the sky this event will appear. Sky-watchers in the Southern Hemisphere get a better view of the same event on October 7, with the crescent moon perched above the planetary pair much higher in the western sky after sunset.

What amazing sky phenomena have you seen lately?