Have you ever heard about the Fairy Circle Mystery? No? Well scientists have found a new expanation for this weird earth phenomenon!

Science is a never ending road and each time a scientist believes he’s solved a mystery, someone else comes up with another explanation.

This is exactly the case for the mysterious fairy circles, these bare and circular patches of land ringed by a border of tall grasses and freckling the landscape from Angola to South Africa. As previously published on this blog, a researcher claimed that termites were responsible for the formation of the these mystery circles.

Now, there’s a new hypothesis. It is published in PLOS ONE and argues that competition between plants is responsible for these weird circular formations.

In other words, plants compete for resources belowground, and some don’t survive. When weaker grass dies, its absence facilitates growth of neighboring plants. The vegetation gap expands until it reaches a size that limits competition between grasses.

But how to explain why these circles do not occur under very dry climates?

The circles do not appear further west in Namibia, where it’s even drier. This suggests that they are dependent on a certain balance of not-too-much but not-too-little rainfall. Because the circles occur only over this narrow range of rainfall, short-term changes in precipitation may cause the circles to appear and disappear.

Is the case closed?

Not quite. To definitively prove the culprit, researchers will need to go into the field and tinker with fairy circle variables such as moisture and soil chemistry. For now, the mystery still endures. 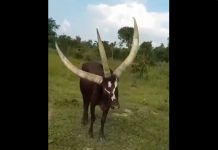