Watching for “Shooting Stars” can be an enjoyable, if unpredictable, observing opportunity during meteor showers. You may see only a few fleeting meteors, or you may see several, or even a fireball! This graphic shows the major showers for this year, and their “radiants.” Best times for observing is meteor showers is after midnight. 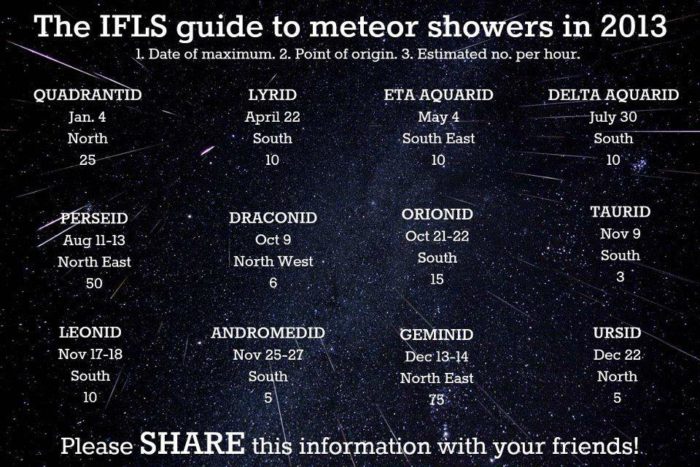 January 3, 2013 before dawn, the Quadrantids Although the Quadrantids can produce over 100 meteors per hour, the sharp peak of this shower tends to last only a few hours, and doesn’t always come at an opportune time. In other words, you have to be in the right spot on Earth to view this meteor shower in all its splendor. The radiant point is in the part of the sky that used to be considered the constellation Quadrans Muralis the Mural Quadrant. You’ll find this radiant near the famous Big Dipper asterism (chart here), in the north-northeastern sky after midnight and highest up before dawn. Because the radiant is fairly far to the north on the sky’s dome, meteor numbers will be greater in the Northern Hemisphere. In 2013, watch in the wee hours – after midnight and before dawn – on January 3. Unfortunately, the bright waning gibbous moon lights up the early morning hours before dawn, the best time of night to watch for these meteors. If this year’s forecast proves correct, western North America and the islands of the North Pacific Ocean might enjoy the most favorable location on the morning of January 3. From eastern and northern Asia, try after midnight and before dawn on January 4 as well, in case the peak comes later than expected. Remember, meteor showers are notorious for defying predictions. This shower is worth a try at northerly latitudes all around the globe. The Lyrid meteor shower – April’s shooting stars – lasts from about April 16 to 25. Lyrid meteors tend to be bright and often leave trails. About 10-20 meteors per hour can be expected at their peak. Plus, the Lyrids are known for uncommon surges that can sometimes bring the rate up to 100 per hour. Those rare outbursts are not easy to predict, but they’re one of the reasons the tantalizing Lyrids are worth checking out around their peak morning. The radiant for this shower is near the bright star Vega in the constellation Lyra (chart here), which rises in the northeast at about 10 p.m. on April evenings. In 2013, the peak morning is April 22, but you might also see meteors before and after that date. There’s a bright waxing gibbous moon in the sky during the Lyrid peak. The greatest number of Lyrid meteors commonly fall in the dark hours just before dawn, so trying watching this meteor shower after moonset – in other words, shortly before dawn on April 22.

This meteor shower has a relatively broad maximum – meaning you watch watch it for several days around the predicted peak. The radiant is near the star Eta in the constellation Aquarius the Water Bearer (click here for chart). The radiant comes over the eastern horizon at about 4 a.m. local time; that is the time at all locations across the globe. For that reason, the hour or two before dawn tends to offer the most Eta Aquarid meteors, no matter where you are on Earth. At northerly latitudes – like those in the northern U.S. and Canada, or northern Europe, for example – the meteor numbers are typically lower for this shower. In the southern half of the U.S., 10 to 20 meteors per hour might be visible in a dark sky. Farther south – for example, at latitudes in the Southern Hemisphere – the meteor numbers may increase dramatically, with perhaps two to three times more Eta Aquarid meteors streaking the southern skies. For the most part, the Eta Aquarids is a predawn shower. In 2013, the waning crescent moon should not intrude too greatly on the Eta Aquarid shower. The most meteors will probably rain down on May 5, in the dark hours before dawn. But watch on May 4 and 6 as well! The broad peak to this shower means that some meteors may fly in the dark hour before dawn for a few days before and after the predicted optimal date. The Perseid meteor shower is perhaps the most beloved meteor shower of the year for the Northern Hemisphere. The shower builds gradually to a peak, often produces 50 to 100 meteors per hour in a dark sky at the peak, and, for us in the Northern Hemisphere, this shower comes when the weather is warm. The Perseids tend to strengthen in number as late night deepens into midnight, and typically produce the most meteors in the wee hours before dawn. They radiate from a point in the constellation Perseus the Hero, but, as with all meteor shower radiant points, you don’t need to know Perseus to watch the shower; instead, the meteors appear in all parts of the sky. They are typically fast and bright meteors. They frequently leave persistent trains. Every year, you can look for the Perseids around August 10-13. They combine with the Delta Aquarid shower (above) to produce the year’s most dazzling display of shooting stars. In 2013, the Perseid meteors will streak across the short summer nights – August 10-13 – from late night until dawn, with little to no interference from the waxing crescent moon. Plus the moon will be near the planet Saturn in the evening hours, giving a colorful prelude to late-night Perseid show. Best mornings to look: August 11, 12 and 13. The radiant point for the Draconid meteor shower almost coincides with the head of the constellation Draco the Dragon in the northern sky. That’s why the Draconids are best viewed from the Northern Hemisphere. The Draconid shower is a real oddity, in that the radiant point stands highest in the sky as darkness falls. That means that, unlike many meteor showers, the Draconids are more likely to fly in the evening hours than in the morning hours after midnight. This shower is usually a sleeper, producing only a handful of languid meteors per hour in most years. But watch out if the Dragon awakes! In rare instances, fiery Draco has been known to spew forth many hundreds of meteors in a single hour. In 2013, the thin waxing crescent moon won’t cast enough moonlight to interfere with the Draconids. Try watching at nightfall and early evening on October 7 and 8.

On a dark, moonless night, the Orionids exhibit a maximum of about 10 to 20 meteors per hour. These fast-moving meteors occasionally leave persistent trains. They sometimes produce bright fireballs, so you might see a few Orionids even in moon-drenched skies. If you trace these meteors backward, they seem to come from the Club of the famous constellation Orion the Hunter. You might know Orion’s bright, ruddy star Betelgeuse. The radiant is north of Betelgeuse. The Orionids have a broad and irregular peak that isn’t easy to predict. More meteors tend to fly after midnight, and the Orionids are typically at their best in the wee hours before dawn. This year, 2013, is not optimal for watching the Orionid meteor shower because a bright waning gibbous moon will be in the sky during the peak hours between midnight and dawn. But you might see some meteors even in bright moonlight. The best viewing for the Orionids in 2013 will probably be before dawn on October 21. Try the days before and after that, too, sticking to the midnight-to-dawn hours. You’ll be watching for those brightest Orionids that can overcome the moon’s glare..

Late night November 4 until dawn November 5, 2013, the South Taurids
The meteoroid streams that feed the South (and North) Taurids are very spread out and diffuse. That means the Taurids are extremely long-lasting (September 25 to November 25) but usually don’t offer more than about 7 meteors per hour. That is true even on the South Taurids’ expected peak night. The Taurids are, however, well known for having a high percentage of fireballs, or exceptionally bright meteors. Plus, the other Taurid shower – the North Taurids – always adds a few more meteors to the mix during the South Taurids’ peak night. In 2013, the thin waxing crescent moon will set at early evening on November 4, leaving dark skies for the peak night of the South Taurid meteor shower. The South Taurids should produce their greatest number of meteors in the wee hours – between midnight and dawn – on November 5. Remember, even a single bright meteor can make your night! Like the South Taurids, the North Taurids meteor shower is long-lasting (October 12 – December 2) but modest, and the peak number is forecast at about 7 meteors per hour. The North and South Taurids combine, however, to provide a nice sprinkling of meteors throughout October and November. Typically, you see the maximum numbers at around midnight, when Taurus the Bull is highest in the sky. Taurid meteors tend to be slow-moving, but sometimes very bright. In 2013, a bright waxing gibbous moon will bleach out all but the brighter meteors during the evening and wee morning hours. But the moon will set after midnight, providing lots of predawn darkness for watching the North Taurids on the morning of November 12.

Radiating from the constellation Leo the Lion, the famous Leonid meteor shower has produced some of the greatest meteor storms in history – at least one in living memory, 1966 – with rates as high as thousands of meteors per minute during a span of 15 minutes on the morning of November 17, 1966. Indeed, on that beautiful night in 1966, the meteors did, briefly, fall like rain. Some who witnessed the 1966 Leonid meteor storm said they felt as if they needed to grip the ground, so strong was the impression of Earth plowing along through space, fording the meteoroid stream. The meteors, after all, were all streaming from a single point in the sky – the radiant point – in this case in the constellation Leo the Lion. Leonid meteor storms sometimes recur in cycles of 33 to 34 years, but the Leonids around the turn of the century – while wonderful for many observers – did not match the shower of 1966. And, in most years, the Lion whimpers rather than roars, producing a maximum of perhaps 10-15 meteors per hour on a dark night. Like many meteor showers, the Leonids ordinarily pick up steam after midnight and display the greatest meteor numbers just before dawn. In 2013, the full moon will interfere with the Leonid meteor shower. A full moon, after all, shines all night long, leaving no dark time for viewing the meteor shower. Still, the peak mornings will be November 17 or 18. Maybe you’ll see some meteors in the bright moonlight. Radiating from near the bright stars Castor and Pollux in the constellation Gemini the Twins, the Geminid meteor shower is one of the finest meteors showers visible in either the Northern or the Southern Hemisphere. The meteors are plentiful, rivaling the August Perseids, with perhaps 50 to 100 meteors per hour visible at the peak. Plus Geminid meteors are often bright, so, if there’s a bright moon, many meteors may be able to overcome the harsh moonlight. These meteors are often as good in the evening as in the hours between midnight and dawn. In 2013, a bright waxing gibbous moon will interfere with the Geminids throughout most of the peak night. Your best bet is to watch on the mornings of December 13 and 14, from moonset until dawn.

Bright fireball explodes over Texas in loud bang so powerful it shook some houses – Another fireball changes night into day in Norway! And...

Astronomers have just discovered a comet so big, it might actually be a minor planet

NASA: We are unable to stop asteroids from impacting and decimating the world