This is an amazing animation showing how earthquake waves travel across massive expanses of landmasses. 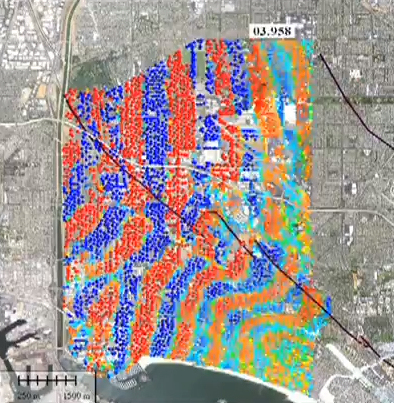 Fascinatingly, the animation shows the physics of the quake, sending energy out in all directions, with the signature of that energy revealing how the fault actually moved. Normal measurement techniques almost never show this. And look at the waves, they are much like ripples on a pond. Very powerful ripples.

The above animation pieces together six earthquakes that occurred between 2007 and 2013 — the most recent of which was on October 19, 2013. Each quake was centered in the Gulf of California between mainland Mexico and the Baja peninsula, and each was about a magnitude 6.0. To create this visualization, the USArray deployed a mobile network of seismometers across the U.S. — and they’ve been doing so for over a decade.

The animation first shows a faint signal from the conglomerate quake’s P-wave, or the compressional wave that starts to make the ground shake. Next, a strong ripple travels from the Baja region northeastward as the seismometers pick up the surface waves, where energy moves close to the Earth’s surface. The surface shaking is stronger in the Southeast, where the soil is loose and moves like Jell-O, than in the rest of the country, where hard rock is closer to the surface. (This soil difference is why a 2011 earthquake in Virginia was felt throughout the East Coast.)

This next video, which was produced in collaboration with seismologists from Caltech and Berkeley, clearly shows the earthquake propagating from the epicenter and across the city in a coherent succession of seismic waves. Though earthquakes might feel completely chaotic, this visualization clearly shows that they’re anything but.

The 12-minute video features four different quakes in both real time and in slow motion (the individual earthquakes start at 0:45, 2:20, 6:00, and 8:35). And as you’ll see in the video, the sensors used by the seismologists are so sensitive that they even pick up human activity, including traffic.