This is really a strange animal behavior! Why is this bear walking upright like a human?

Have you ever seen a bipedal bear? I haven’t before I watched this unexpected video!

On Monday, August 4, 2014 at 5:50 am, a resident of Jefferson Township, New Jersey, filmed this unbelievable scene: A bear standing on its back legs and walking upright like a human… Baffling!

Wait a minute… Could this be the same bear than that seen two weeks ago in Oak Bridge, New Jersey? It is actually a 10 minutes drive (5.2 miles away!)

Well after reflexion, this strange behavior could be due to a front leg injury. Unless the animal is trying to mimic the human behavior in order remain unnoticed. 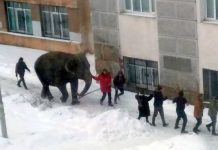