Sleep sound: This audio file is an ~8h EEG recording of a patient sleeping.

The rescaling of the waveforms into an audible range resulted in a 6m37 audio file.

REM sleep occurs approximately 2:30 – 4:20 and is audibly significantly different from other sleep stages.

As explained by Web-MD: “Sleep is prompted by natural cycles of activity in the brain and consists of two basic states: rapid eye movement (REM) sleep and non-rapid eye movement (NREM) sleep, which consists of Stages 1 through 4. During sleep, the body cycles between non-REM and REM sleep. Typically, people begin the sleep cycle with a period of non-REM sleep followed by a very short period of REM sleep. Dreams generally occur in the REM stage of sleep.“

Amazing piece of art and medicine! 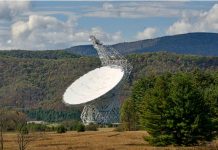