This morning, a still mysterious fireball-like object lit up the sky over Russian Far East!

The unidentified flying object left a long trail of white light behind, which reportedly hung in the sky for the next two hours. Real meteor? Or UFO sightings?

The sky in the Far East of Russia was lit up by a strange meteor-like object this morning.

The still unidentified flying object was observed over the city of Blagoveschensk. It left a long trail of white light behind, which reportedly hung in the sky for the next two hours. This is really long!

But, actually, the journey of this odd ‘fireball’ was short-lived. After a few seconds of flight, the object exploded and disintegrated in a bright flash.

Locals claim they witnessed a meteorite, but so far there has been no official information about the celestial phenomena.

What do you think it was? A fireball meteor?, A UFO?, Or space junk passing through the Earth atmosphere… 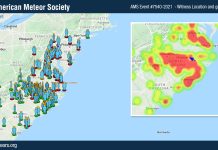