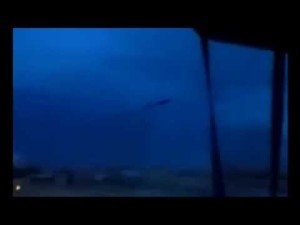 And suddenly, an UFO appeared out of a lightning storm in Nebraska on April 2, 2015!

Please tell me what this unidentified object spotted while driving between Alma and Republican City actually is!

The strange object that appears in the upper right corner seems to be flying at low altitude and traveling very fast. It is cylindrical, spiraling, and appears out of nowhere with disappearing trail.

The National Weather Service in Hastings Nebraska ‘liked’ it on Facebook, but don’t have much of an explanation. Many people online have commented that this could be anything from a secret government project to extraterrestrial.

Could it be a helicopter? A flock of birds? Is this experimental or foreign technology? Is it some life form? What do you think?