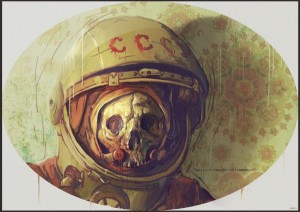 There are those who believe that hurtling through the void of space are the remains of several preserved human astronauts, former collaborators of a secret Soviet space program from the 1950s and 60s.

Russian officials have never revealed any evidence that proves the existence of such a program, but this hasn’t stopped the rumor from thriving for over 50 years.

There have been a number of allegations that such a space program was real and that it led to a number of deaths, but none are quite as evocative or famous as the controversy surrounding the Judica-Cordiglia recordings. In the late 1950s and early 1960s brothers Achille and Gian Judica-Cordiglia believed that they intercepted transmissions from Sputnik I and Explorer I, but their most famous recording was that of a desperate ‘phantom cosmonaut’ whose last broadcast indicated that her craft was beginning to combust around her.

Here a recording of the incident:

and now the transcript of what this lost cosmonaut is thought to be saying:

Other recordings include what sounds like an SOS signal on November 1960 and possible gasping of a suffocating cosmonaut in February 1961.

Many have cast doubt that these voices belong to Russian personnel as the voices don’t follow transmission protocol and the astronauts who allegedly died were apparently only technicians and trainees involved in the development and operation of space hardware.