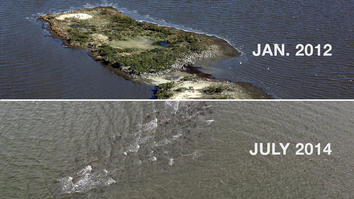 Cat Island was once one of the four largest bird-nesting grounds in Louisiana.

Now it has disappeared…The Gulf oil spill in 2010 has disintegrated the entire island.

The idea that oil can dissolve a whole island is not intuitive at all. But according to National Geographic, the Deepwater Horizon oil spill killed the mangroves growing there, destroying the root system that held the island’s sediment in place, which then faded away!

Since 2010, the 5.5 acre island has been washing away into the Gulf of Mexico… This collateral effect of the spill is for birds that breed on the island devastating.