A low rumbling sound was emitted by a large but shallow M5.2 earthquake off Queensland’s south east coast at 9.41am on July 30, 2015.

That’s the biggest earthquake to hit the area since 1901 when a 5.6 magnitude quake hit. Residents have been evacuated in the Wide Bay city, but there is no tsunami threat to the east coast.

Here the report in the news:

Bundaberg residents have reported buildings swaying in the city’s CBD as Queensland’s southeast was rocked by an earthquake.

There were evacuations in the Wide Bay city, including the seven-story Auswide Bank building, following the magnitude-5.3 quake which occurred in the Coral Sea, 100km off the coast, at 9.41am.

Social media went into overdrive just before 10am with people saying they felt tremors that rattled their houses and scared pets and wildlife from Bundaberg to the Gold Coast.

Geoscience Australia confirmed the earthquake struck at a depth of 35km but there’s little chance of a tsunami threat to the east coast.

‘Our concern is if it occurred right on the shelf, which does have the possibility of inducing a sub-marine landslide and that can induce a local tsunami,’ senior seismologist John Bathgate said.

‘But it doesn’t appear to have occurred at this stage.’

The quake could have been felt by people up to 228km away, and could have caused damage up to 18km away. 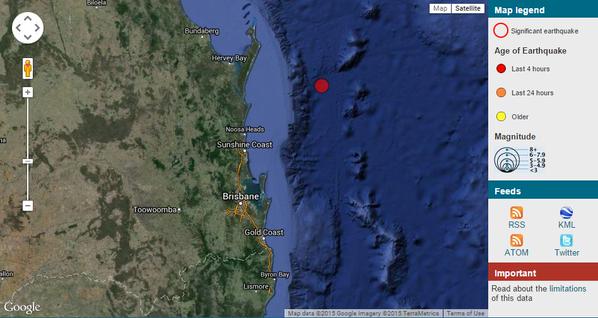 Due to the relatively large size of the quake in Australia’s least seismic state, Mr Bathgate said it was more likely to produce after-shocks.

‘Each earthquake is different and we can’t predict what may follow but I would expect some aftershock activity,’ he said.

‘It’s not particularly common (to Queensland) but we do get these earthquakes from time to time.

The small country town of Eidsvold, west of Hervey Bay, experienced a 5.1-magnitude quake in February.

Laine from Hervey Bay told ABC Radio he was about to go fishing at Woody Point when his boat and the dock began rocking uncontrollably.

‘All of a sudden the whole place was shaking,’ he said. ‘The ground was shaking, it was quite unbelievable. It went on for about 10 to 15 seconds.’

Other southeast Queenslanders reported they felt tremors from five to 15 seconds, which scared off pets and local wildlife.

Nick, from Sunrise Beach near Noosa, also told ABC Radio that he heard a low rumbling sound from his kitchen.

‘All the plates and things on the racks were rattling,’ he said. ‘I looked out the kitchen window and I could see the swimming pool water was rippling.’

Queensland Rail has taken precautions by running their trains slower on their Caboolture and Sunshine Coast lines.

Another video of the live tremors is available here.

Did you hear it? Did you feel it? Tell us your story!