The Upper Terrace Drive near Mammoth Hot Springs has been closed to vehicles due to a new thermal feature that is affecting the road.

The thermal feature, visibly active since May 2015, reaches temperature up to 152 degrees Fahrenheit adjacent and under the pavement. Drilled holes now have hot water bubbling at the surface or very near the surface. WTH? 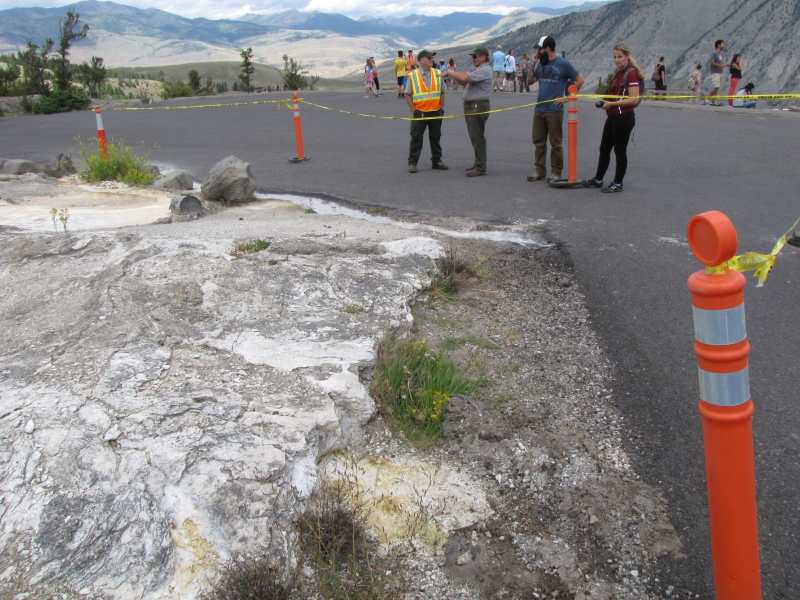 Rangers at Yellowstone National Park have temporarily closed Upper Terrace Drive near Mammoth Hot Springs to vehicles due to a new thermal feature that is affecting the road.

A press release from the park says that the new feature became “visibly active” in May near the Upper Terrace parking lot, creating new small terraces adjacent to the drive.

Geologists and rangers monitored the thermal feature and found temperatures up to 152 degrees Fahrenheit.

Rangers noticed additional thermal activity this week adjacent to and under the pavement, which triggered the temporary closure.

Thermal imaging shows heat under the pavement as well.

Park geologist Dr. Hank Heasler said, “We have known this area had heat near the surface based on the fact that it does not hold snow in the winter. We drilled two holes a half-meter (20 inches) deep, both of which now have hot water bubbling at the surface or very near the surface.”

Park visitors are still able to walk on the Upper Terrace Drive.

Maintenance staff is preparing bumper logs to protect the thermal feature and keep the outflow off of the pavement.

Once those are in place, the road will reopen to vehicle traffic.

Heasler noted, “As in all of the thermal areas, visitors need to stay on the boardwalks or paved areas and avoid touching thermal features.”

That’s just weird! Well I mean there is a supervolcano sitting right under!