A series of eight rare earthquakes rattled Queensland, Australia in the past week.

Saturday’s magnitude-5.7 earthquake is the equal second-strongest earthquake in recorded history in Queensland, behind the magnitude-6.0 event in 1918 and packed as much force as 15 atomic bombs. 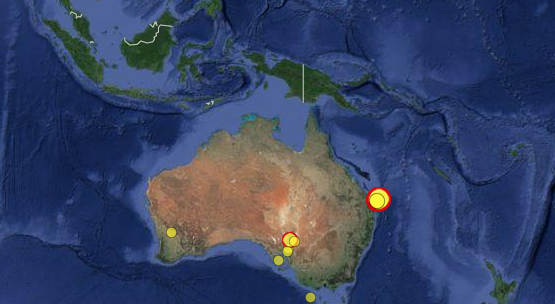 All Queensland’s quakes occurred in an area about 120 kilometres east of Fraser Island, and three of them registered M5 or above. An hour after the M5.7 event on Saturday, a M5.1 earthquake struck around the same spot.

A M5 quake is the strength of an atomic bomb test. A M5.7 earthquake is about 15 times bigger than a M5, so that’s 15 atomic blasts of energy. OMG!

[quote_box_center]We can definitely expect to feel more tremors and it is possible we could still be in for something bigger still. And these events can cause tsunamis, although normall, an earthquake needs to be more than M6.5 to cause a tsunami.[/quote_box_center]

A series of large earthquakes is very rare in Australia. The most famous swarm took place in Tennant Creek in 1988 (3 earthquakes, > M6.0). This also happened in Quennsland in 1918, when two strong quakes (M5.7 and M6.0) hit offshore of Gladstone within a few hours.

List of rare earthquakes that hit Queensland over the last few days: