Sprinkled with more polar bears than people, Svalbard is the end of the world as we know it.

Svalbard’s only town of any size, Longyearbyen is currently being hit by an apocalyptical snow storm with hurricane-strong winds triggering a large avalanche that swallowed cars and houses.

This is the most violent storm at Svalbard in the past 30 years.

In Longyearbyen – the largest settlement on the Norwegian Svalbard archipelago – people stayed two days long barricated in their homes.

The natural disaster damaged 10 buildings – mostly two-storey wooden house – some of them being dragged several meters by a large avalanche at Mount Sukkertoppen.

Several people were taken to hospital after the morning avalanche came down on houses in the eastern part of Longyearbyen.

Medical care was provided to 10 people, including two children for grave injuries.

This reminds me of the apocalyptical weather bomb in Iceland one year ago. 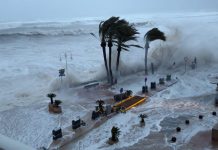