Within the last few days we have heard about the WEATHER BOMB to engulf the Atlantic and parts of Europe!

Well I didn’t believe anything about this explosive cyclogenesis before I saw this terrifying video filmed in West Iceland today morning! OMG!

This insane video was filmed at 7. a.m, this morn­ing – December 10, 2014 – by Re­becca Os­ten­feld in Hólar in Dalasýsla, West Ice­land where she lives with her husband, and her three chil­dren on a small farm.

You remember the Buffalo lake-effect storm?

Ironically, she says be­fore opening the front door:”Well, it’s morn­ing now. Let’s have a look at the weather, the lovely Ice­landic weather“. 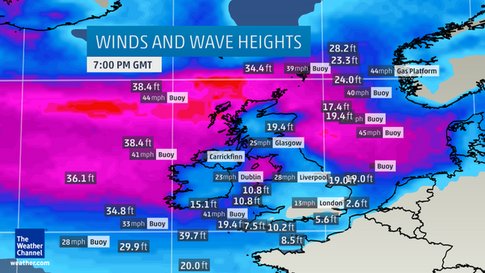 The explosive weather bomb, named “Alexandra” in Europe, has already brought wind gusts up to 96 mph in Iceland, causing power outages and travel disruption there. Waves higher than 30 feet have already been reported over the open Atlantic.

Yes, with this apocalyptic weather you better stay home!