A 2.2-magnitude earthquake was reported on February 7, 2018. And many residents of Putnam and northern Westchester counties woke up with a bang produced by the minor quake that hit three miles northwest of Mohegan Lake in Yorktown, Putnam Valley. People throughout the area posted on social media about feeling the quake, including residents of Chappaqua, Cortlandt, Lewisboro, Mahopac and Putnam Valley, and even Monroe in Orange County. Two very small aftershocks — both registering 1.3-magnitude — followed the main earthquake. The first aftershock appeared around 6:16 a.m. and the second around 8:40 a.m.

Erik Contzius said he felt the earthquake at his home in Peekskill. He first thought it was a snowplow, but then his entire house started shaking. And there was a little bit of relief when it was confirmed to be an earthquake.

@USGS earthquake this morning in the Northeast? Loud boom and rumbling!

@chappaqua @earthquake Strange doings this morning. Earthquake around 6:15am. Could hear it AND feel it.

It was a small earthquake, the type that hits this area every two to three years. The last earthquake that measured this strong around here was in 2014, when a 2.5-magnitude quake hit near Peekskill. 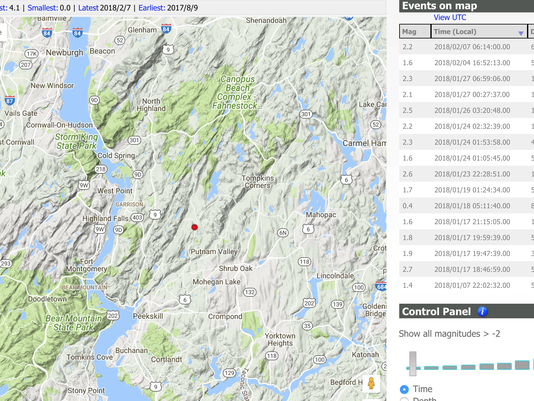 People don’t usually feel smaller quakes in this region, but plenty of people were shaken by this one. According to Facebook comments, the tremor “sounded like very loud thunder and heard things in the house rattling like change on the dresser and the doors rattling,“, and houses rumbled: “My entire house shook and rattled here in Cortlandt Manor/Garrison.“.

The main quake was followed by two very small aftershocks — both registering 1.3-magnitude.