Large natural balls in the Franz Josef archipelago leave scientists flummoxed. Visitors to this cosmic landscape named the round rocks ‘footballs of the Gods’. The huge stone balls up to two metres in height are found on appropriately-named Champ island above the polar circle. Perfectly spherical they are scattered all over this northern uninhabited outpost. And at first it is hard to believe that they are natural and not made by man, or possibly giants.

Yet the barren 374 km2 (144 sq miles) island was never inhabited and scientists are sure they are not artificial, even if they cannot agree how they were formed.

The huge stone balls up to two metres in height are found on Champ island above the polar circle.

Similar but smaller stone balls were found last year on Heiss island in the same archipelago.

Russian polar researcher Viktor Boyarsky said of the extraordinary phenomenon: ‘The spheres are made of soft sand stone. You can see that many large balls fell apart into two big halves, and the largest stone on the island is breaking down year by year.‘

Konstantin Zaikov, of the Arctic Federal University, said: ‘They look man-made, but they are in fact stones that were formed thousands years ago by crystallisation and subsequent magnetisation of grains of sand onto the crystal. Sand grains harden and create a fairly dense spherical shape.‘

On Heiss island ‘the spherulites look like round bullets or cannon balls. We found balls of different sizes, but none as big as at Champ island.’ 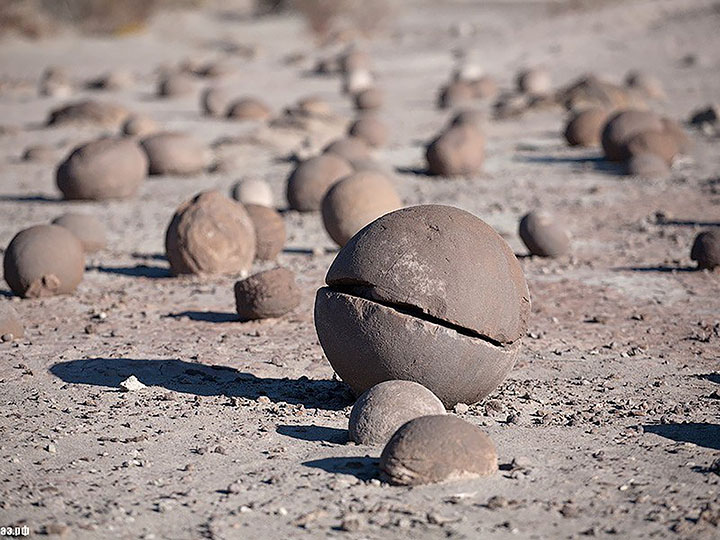 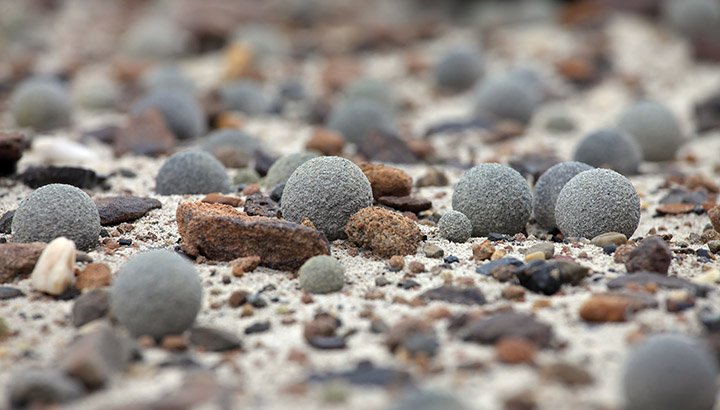 Yet Austrian geologist Sepp Fridhubera claimed the rounded shapes of the rocks were formed underwater and they have an organic core in the centre.

As previous reports have noted every geologist seems to have their own theory.

Champ island is named after William S. Champ, a representative of American industrialist William Ziegler who funded a number of pioneering 19th century Arctic explorations. Heiss is a Germanised version of the name Hayes. Isaac Israel Hayes, also American, was an Arctic explorer.

Similar round stones were discovered in Volgograd, New Zealand, China, Bosnia, and South Africa. Another unexplained nature phenomenon in a remote area around the world. WOW! I want to go there!