The tornado was hovering over the house,’ Amanda Woodley, Bledsoe’s granddaughter, told CNN. ‘It was just a tornado fire over the house. It was the most intense tornado in California history. But unlike most tornadoes, this vortex had a swirl of flames that reached an unprecedented 143 mph as it barreled toward Redding and scraped the bark off trees, uprooted trunks and incinerated homes.

Trees appeared to be levitating, and branches and sheet-metal roofs seemed to orbit the column, Moore said. Uprooted objects launched into the air ignited mid-flight.

Vegetation and homes hundreds of feet from the column also caught fire before the twister arrived, he said. It was as loud as a roaring jet engine.

Firenadoes are formed from a fire’s intense heat, causing the air to heat up quickly and rise rapidly. That, combined with surface winds that are obviously quite strong, creates a vortex similar to a dust devil, as explained in this short video:

Firenadoes rampaging around that are the equivalent of powerful tornadoes! Hard to get more apocalyptic! 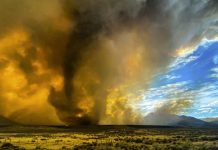 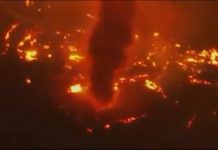 Impressive fire DEVILs form during wildfires in Randolph, Arizona just like in the best Hollywood movies 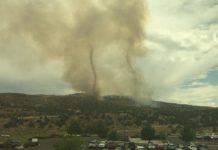 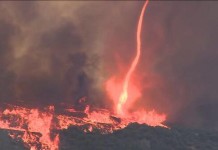 Firestorm: Firenado during San Diego County wildfires on May 15 2014 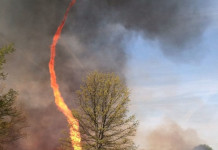 Fire tornado captured near Chillicothe, Missouri on May 3, 2014 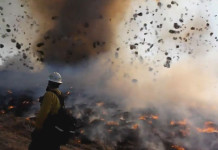 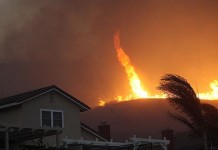