However, today has been a day of incredible co-incidence as not one but two major uncontained failures occurred over populated areas.

Departing from Denver International Airport almost an hour late at 13:04 this afternoon, United Flight UA328 was due to fly to Honolulu. This flight was expected to last seven hours and 30 minutes.
However, the flight ended up lasting just 30 minutes after the aircraft’s number two engine suffered an uncontained engine failure around five minutes into the flight at 13,400 feet. 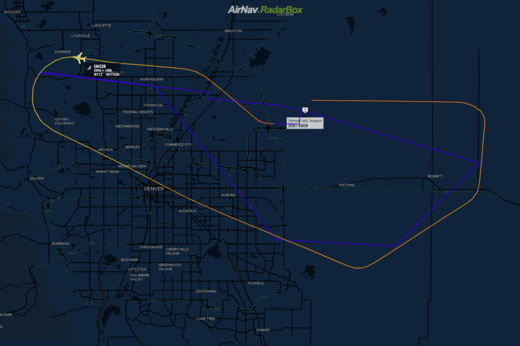 Talking to the Denver departure controllers as recorded by LiveATC.net, the pilot of United 328 said,

According to the airline, the Boeing 777 had 231 passengers on board, accompanied by ten members of crew. According to data from RadarBox.com, the aircraft has been busy throughout the past year, completing 2184.5 hours over 530 flights in the past 12 months.

The incident appears to have occurred over the district of Broomfield. The local police department shared a photo of the front of the engine cowling lying in somebody’s front yard:
They then went on to urge the public not to touch debris if found and to report it immediately. The police department said that the NTSB is dispatching a team that wishes to view all debris in situ. The department went on to share further photos of side cowling lying in a field:

On the incident, a United Airlines spokesperson said:

“Flight 328 from Denver to Honolulu experienced an engine failure shortly after departure, returned safely to Denver and was met by emergency crews as a precaution. There are no reported injuries onboard, and we will share more information as it becomes available.”

A cargo plane departing Maastricht Aachen Airport (MST) lost metal parts as it took off to its New York destination. It appears that these fragments came from an engine failure, with sources noting that the aircraft involved is a Boeing 747-400.

Sources also report that some people on the ground have been slightly injured while various cars and property were damaged as a result of the fragments coming down. The aircraft was diverted to Liege.

The following statement was given by the firm operating the 747:

“Shortly after departure the crew noticed an engine issue, and followed the correct procedures to investigate the problem. Resulting from this, the decision was made, with air traffic approval, to divert to Liege Airport, Belgium, where it landed safely.”

What we know so far

According to Dutch website Up in the Sky, the flight involved was LGT5504 with a Boeing 747-400 freighter operated by Longtail Aviation.

Taking off at around 16:10 CET, flight LGT5504 was bound for New York. However, due to losing an engine, the aircraft diverted. Flying on three engines, the 747 headed to nearby Liège (LGG) in Belgium, flying at an altitude of 10,000 feet. 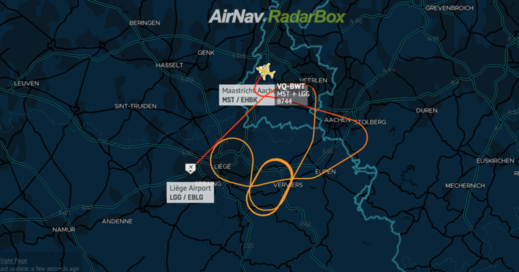 Video taken and posted to Twitter shows the 747 emitting smoke above the skies of Meerssen – less than three kilometers from the Maastricht Aachen Airport runway.

NOS.nl reports that pieces of metal came down from the aircraft in the Meerssen area, adding that two people were hit by the debris, sustaining minor injuries. A woman was sent to the hospital with a head injury.

Additionally, cars and homes were damaged, but at this point, the extent of the damage is unknown. Photos posted to Twitter also give us a closer view of the fragments and the damage they caused to vehicles.

OMG! That is scary! And add a hailstorm to the mix… It’s the apocalypse! More information on Simple Flying.