A mysterious fireball caught on video floating through the night sky near Peachland sparked a blaze Tuesday night.

Local resident Jay Balehowsky said he was taking his garbage out when he noticed a bright object glowing in the sky.

“It seemed like it was kind of circling around,” he said.

At that point, he said he thought it was maybe a drone.

“But then we saw it break up, and it started flying towards us,” he said. “We saw the rest of it burn out and then one piece basically fell down into the neighbour’s yard.”

Balehowksy said he jumped in his truck and drove around to see if he could find it.

At that point, he didn’t know it had sparked a blaze.

Meanwhile, somebody else had spotted the fire from afar and called 911, Peachland fire Chief Dennis Craig said.

Four firetrucks and approximately a dozen firefighters rushed to a report of a grass fire off Ponderosa Drive around 8:45 p.m.

“We actually had difficulty finding it originally, as it was a single caller from a distance,” Craig said. “It wasn’t until we got to a different vantage point that we were able to locate the fire.”

“At that point, it had grown, and it was a fairly fast-moving fire given the time of night and the time of year.”

The blaze rapidly spread towards a couple of structures, and the heat melted some of the vinyl siding on a house, Craig said.

Nobody was injured, he added.

Craig said residents in the area didn’t even initially realize that there was a fire right below their house.

“It wasn’t until the fire trucks started showing up,” he said.

The fire chief noted that he isn’t a scientist, but he isn’t convinced that the unidentified object was a meteor.

“I don’t think rocks remain combustible too long,” he said. “It doesn’t seem like a hot rock would cause a fire like that.”

“The rocks show the flame because they’re coming through the atmosphere with friction,” he said. “Once they stop moving, they don’t support combustion.”

The fire department plans to go back to the site on Wednesday and see if they can find anything in daylight.

“To be honest, if I didn’t see the video, I’d be very skeptical,” he said. “My initial reaction would have been fireworks or something along those lines.”

But given the altitude the object came from, it couldn’t have been fireworks or even a flare, Craig added.

“The video clearly shows something at a high, high altitude that fell from the sky,” Craig said.

“I’ve been in the service now going on 22 years, and this is absolutely a first for me.”

Balehowsky said the video was shot on a phone, and it doesn’t fully show the glow and brightness of the fireball. [Global News] 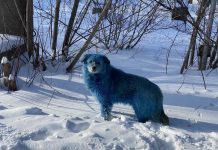