There isn’t a shortage of ancient texts and general evidence to support the idea that giants lived on Earth. Now, meet Kap Dwa, a two-headed, 3.5-meter-tall giant from Patagonia.

So, where did Kap Dwa come from?

The story begins in 1673 when this massive two-headed giant was captured by Spanish sailors. The ‘monster’ remained captive until he was killed with a pike through the chest, while trying to escape.

In 1914, after being passed from one showman to another, the mummified remains of Kap Dwa ended up at Weston’s Birnbeck Pier. There, his remains spent some 45 years on display until “Lord” Thomas Howard purchased the remains in 1959.

Kap-Dwa continued to amaze people and somehow ended up in Baltimore Md, in a strange collection at Bob’s Side Show at The Antique Man Ltd, owned by Robert Gerber and his wife.

You may think, this is nothing but another elaborate fake.

However, Kap-Dwa does exist and the mummified remains can be found in Gerber’s collection.

Mr. Gerber however, tells a much different story than the above.

According to Gerber, Kap-Dwa was in fact found already dead on a beach with a massive spear in his chest.

The ‘creature’ was mummified by locals in Paraguay—not Patagonia— until an English Captain called George Bickle came across his remains, eventually transporting him to England, to a museum in Blackpool where he stayed on display for several years.

Eventually, the mummified remains were transported back to the Americas to Baltimore.

Ok, so he did exist, does that prove Giants were common in the past?

We can find numerous ancient texts and accounts that mention the existence of giants. Some of these texts can even be found in religious books like the bible.

“There were giants in the earth in those days; and also after that, when the sons of God came in unto the daughters of men, and they bare children to them, the same became mighty men which were of old, men of renown.” -Genesis 6:4

The Nephilim are believed to have been the offspring of the “sons of God” and the “daughters of men” before the Deluge according to Genesis 6:4; the name is also used in reference to giants who inhabited Canaan at the time of the Israelite conquest of Canaan according to Numbers 13:33.

“And there we saw the Nephilim, the sons of Anak, who come of the Nephilim; and we were in our own sight as grasshoppers, and so we were in their sight.” -Numbers 13:33. 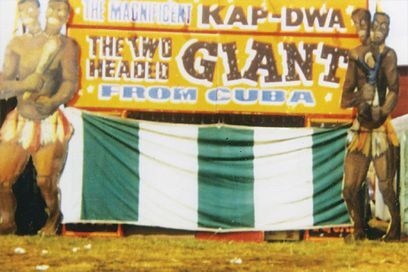 To add even more credibility to this story, a Dutch captain – Sebalt de Weert – associated with the exploration of the coasts of South America and the Falkland Islands south of Argentina, claimed to have seen members of a “race of giants” while he and his crew where rowing to an island in the Magellan Strait.

According to the captain these aggressive, long-haired and reddish-brown giants were naked and riding towards them on 7 odd-looking boats…

Kap-Dwa is real as many other discoveries of giant human bones and huge skeletons around the world. And what about the two heads? Was the giant a ‘conjoined twins’.

It is up to you to conclude whether or not, something like this is possible, and whether or not the existence of Kap-Dwa proves that in the distant past, giants did exist on Earth… Meanwhile, every year, scientists find new proofs showing that giants once roamed Earth…

Why Should You Study History?

What is the longest prehistoric human trail ever discovered?

You think 2020 sucks? Meet the worst time in human history

Symbols of Transition: Shifting sands unveil ‘stick man’ petroglyphs on Hawaii beach… And they are actually present all over the world !?!