Ivan T. Sanderson, a famous US zoologist, once shared with the public a curious story about a letter he received from Alan Makshir, an engineer who was stationed on the Aleutian island of Shemya during World War II.

While building an airstrip, his crew bulldozed a group of hills and discovered under several sedimentary layers what appeared to be human remains. The Alaskan mound was in fact a graveyard of gigantic human remains, consisting of crania and long leg bones.

Since an adult skull normally measures about eight inches from back to front, such a large crania would imply an immense size for a normally proportioned human.

There is an excellent book by Steve Quayle, called Genesis 6 Giants – Volume 2, that shows legends, myths, and oral traditions about giants may not be so farfetched as you have been taught.

The ancient giants had a double row of teeth and disproportionately flat heads.

Furthermore, every skull was said to have been neatly trepanned – a process of cutting a hole in the upper portion of the skull.

The habit of flattening the skull of an infant and forcing it to grow in an elongated shape was a practice used by ancient Peruvians, the Mayas, and the Flathead Indians of Montana.

Sanderson tried to gather further proof, eventually receiving a letter from another member of the unit who confirmed the report.

The letters both indicated that the Smithsonian Institution had collected the remains, yet nothing else was heard.

Sanderson seemed convinced that the Smithsonian Institution had received the bizarre relics, but wondered why they would not release the data. He asked: “… is it that these people cannot face rewriting all the textbooks?”

According to the Paiutes, the Si-Te-Cah were a race of red-haired cannibalistic giants in Arizona!

If you want to learn much more about Giants, you should watch: True Legends – Episode 3: Holocaust of Giants by Steve Quayle or read Steve Quayle’s book Genesis 6 Giants – Volume 2. 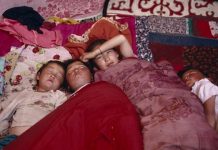