It may have been just one month away from the official start of summer, but on May 20 people across western Montana woke up to a winter wonderland.

Residents in western Montana were greeted by scenes of a winter wonderland in May on Thursday. Snow began piling up fast in some communities, and Mother Nature is ready to dish out more winter weather in the coming days.

A long-duration snowstorm is underway with the potential to unleash several feel of snow on the higher elevations of Montana, but also several inches of snow in not-so-high elevations of Big Sky Country.

Even though snow this late in the season isn’t unheard of, the extensive area of the northern Rockies in the crosshairs of winter weather will be quite unusual.

Winter storm warnings remained in effect for parts of Montana on Thursday as the wintry blast followed just days after near-record heat with highs in the 80s F for parts of the region.

High temperatures were slashed by 40-60 degrees Fahrenheit from their peak on Monday to Thursday. The temperature in Helena, Montana, soared to 86 degrees on Monday, and by Friday, the high will only climb into the upper 30s. 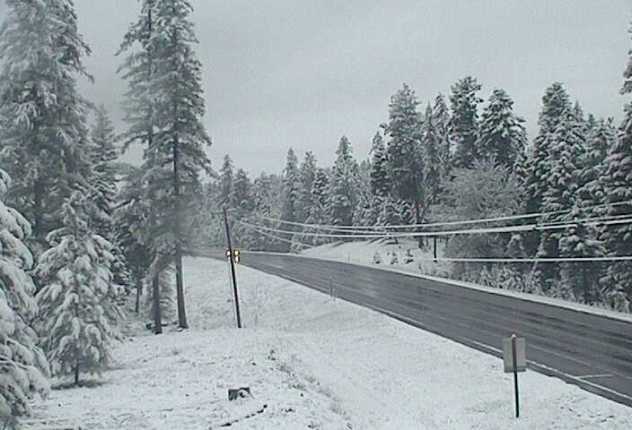 The above image shows Greenough Hill on Route 22 in Montana, with trees and non-paved surfaces covered in snow on Thursday morning, May 20 (Photo/MontanaDOT)

Cattle rancher Justin Iverson explained how the snow, which piled up three inches high in Potomac, Montana, on Thursday morning, was effecting his herd.

“The cows have started to shed their winter coat, but still have a little left to go. They should handle this weather just fine. The larger concern is respiratory disease due to the stress from the cold,” Iverson told AccuWeather. 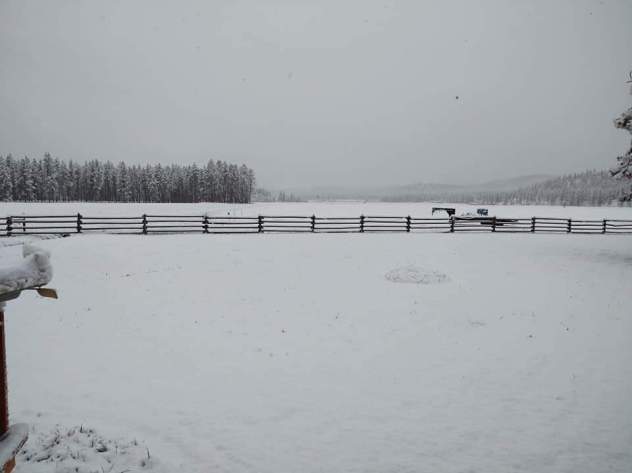 About three inches of snow fell across the fields in Potomic, Montana on the morning of Thursday, May 20 (Photo/Justin Iverson).

Iverson also said that the snow had damaged some barely they had planted just recently.

Heavy snowfall is no stranger to Montana and the northern Rockies during May. There have even been snowstorms in June across the region. For instance, the latest accumulating snow on record in Great Falls, Montana, was 5.1 inches on June 12, 1969.

However, during the middle to late spring, the areal coverage of snowstorms tends to shrink in size with nearly perfect conditions needed to produce accumulating snow in the first place.

The average date of the last 0.1 of an inch of snow or more in Great Falls is May 10. With an AccuWeather prediction of 4-8 inches of snow in the city more than a week past this date, it is not a very common event. 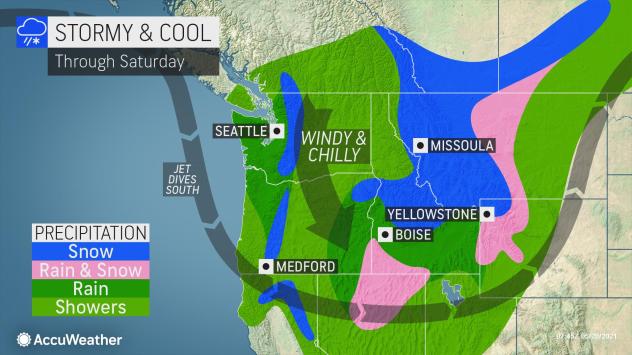 Since 1920, there have been only five years with storms of 8 inches or more in Great Falls, AccuWeather Senior Storm Warning Meteorologist Brian Wimer said.

The storm has all the bells and whistles going for it to be not only a whopper of a snowstorm for some locations, but also a large one as well in terms of overall coverage of accumulating snow.

“Snow levels with this storm are likely to dip as low as 3,000 feet in parts of central Montana as the combination of fresh cold air moving in and the action of wind blowing uphill and squeezing out moisture will make for a substantial snowfall,” AccuWeather Senior Meteorologist Brett Anderson said.

Accumulating snow is expected to fall on an area more than 70,000 square miles in central and western Montana alone from Wednesday to Saturday.

Snow is also forecast to fall and accumulate in portions of northern and central Idaho, northwestern Wyoming and even into the southern parts of British Columbia, Alberta and Saskatchewan in Canada.

Farther to the west, a few inches of snow are expected to fall on the Cascades of Washington and Oregon into Thursday. Since freezing levels can periodically dip to the passes, a small slushy accumulation can occur at times over the crests.

The storm could join the ranks of the top 10 greatest impact snowfalls for the region, according to AccuWeather forecasters. The NWS ranks snowstorms on a scale called MontSIS, which takes into accounts snowstorms that unleash more than 7 inches and factors in the area impacted. For comparison, the May 9-13, 1983, storm that dropped up to 35 inches of snow is ranked 11th of all-time for the state, according to the National Weather Service in Great Falls. 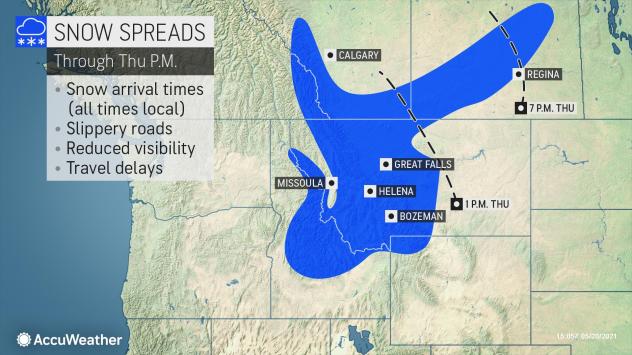 Small-scale storms, such as one that unfolded May 28-30, 1982, dropped as much as 66 inches of snow on Montana. That same storm unleashed 25.9 inches of snow in far-northern Havre, Montana, with 27.7 inches falling on Lewistown, Montana, a city in the middle of the state.

Other Montana cities have been smacked by May snowstorms as well over the past 100 years or more.

From May 20-22, 1908, Glendive was hit with a foot of snow. The city sits in the eastern part of the state and is located between the Badlands and Yellowstone River.

More recently, in 1965, Bozeman, a city situated in southern Montana in the Rocky Mountains, was slammed with 21.7 inches of snow spanning May 5-7.

“This will be a long-duration snowstorm for the northern Rockies with the heaviest snow in central and western Montana likely to fall from Wednesday evening to Thursday evening,” Anderson said. “During this period, snowfall rates of 1-3 inches per hour are highly probable just east of the Continental Divide.”

“The heaviest snowfall is likely to be in the Glacier National Park area of Montana, along and just east of the Divide, with 2-3 feet likely in the higher elevations of the park and locally greater amounts possible,” added Anderson. 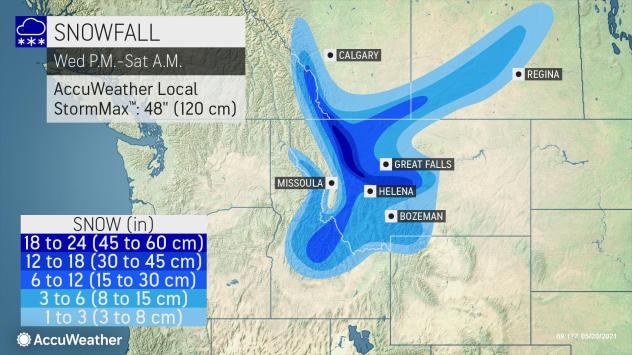 An AccuWeather Local StormMax™ of 48 inches is expected with this storm over the higher elevations of west-central Montana.

In Canada, heavy snowfall will also likely impact the Waterton Lakes National Park area, located in extreme southwestern Alberta and along the eastern slopes of the Divide.

A few inches of snow are expected to fall on the higher elevations of Yellowstone National Park in northwestern Wyoming Thursday evening into Friday.

“These parks are popular tourist destinations and people planning on venturing into area could be turned away or possibly face the risk of being stranded,” Anderson said. 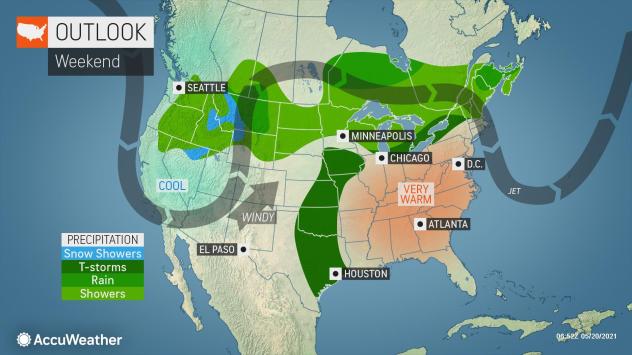 Spring snowstorms are almost always a problem as leaves begin to emerge on the trees at low and intermediate elevations.

“The heavy and wet nature of the snow from this storm is likely to lead to breaking branches and falling trees, and when that occurs there is the likelihood of power outages,” Anderson warned.

At lower elevations, periods of snow and rain are likely to occur. Most roads at lower elevations during much of the storm are expected to be just wet as enough of the sun’s energy has made these surfaces relatively warm, and enough energy from the sun will continue to warm paved areas during the daytime, even as the storm gets underway.

“Higher sections, including the passes, of I-90 and I-15 may be snow- covered and slippery, especially Wednesday night through Thursday morning and again Thursday night,” Anderson said.

West of the Divide, where winds blow downhill and allow some natural drying and warming of the air during the storm, much less snow is forecast to fall.

“Because of the downsloping wind, Kalispell, Montana, is likely to only receive a small amount of snow from the storm,” Anderson said.

The same storm is forecast to spread some moisture in the form of rain and wet snowflakes to parts of eastern Montana, the Dakotas and southern Manitoba. There is the potential for 0.50 of an inch to 1 inch of rainfall in this area from late this week through this weekend. Local amounts of 2 inches are possible.

Much of this area has been hit by extreme drought with rainfall and melted snow less than 50% of average since Jan. 1, 2021. 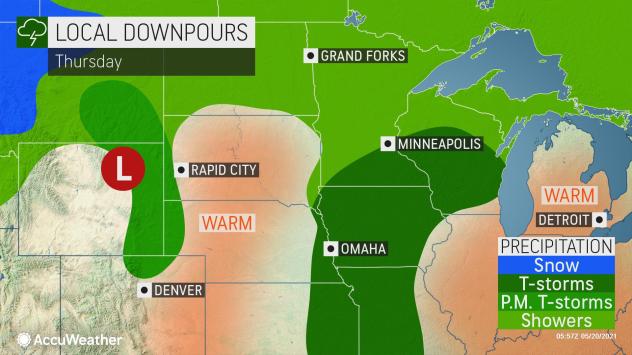 Minot, North Dakota, has only received 0.50 of an inch of rain or 12% of average since the start of the year. Normal rainfall for the period is 4.20 inches. At this point, even a few tenths of an inch of rain would be welcomed with open arms.

The extended drought has resulted in many days of critical wildfire danger, a lack of soil moisture, dwindling water supply and poor pasture conditions for livestock. [Accuweather]