Imagine a world in which I was legally allowed to steal 13–30% of your wealth every single year, and lie to you about how much I’m stealing.
Welcome to Planet Earth, 2021.

Inflation is something that everyone needs to understand and pay extremely close attention to, otherwise, it will destroy their financial future.

Because prices are rising fast:

Do you believe them?

There are three things you need to know about inflation

Let’s face it: The corporate-controlled Feds are out of control. They’ve been printing trillions of dollars in fake money to prop up the elites. 30% of all US dollars in existence were printed in the past year. 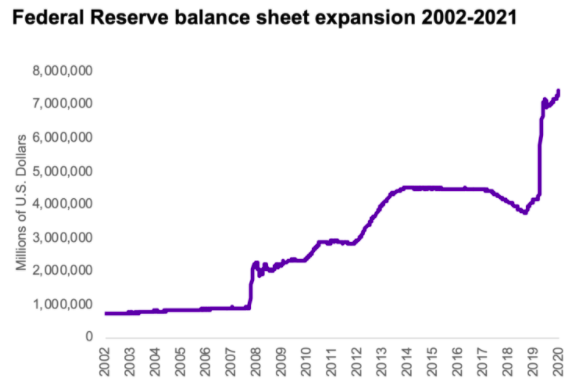 They’ve been printing trillions of dollars in fake money to prop up the elites. 30% of all US dollars in existence were printed in the past year. Graph: Emles Asset Management
As you can see, this causes a major problem:

That’s right: Every single one of Grandpa’s hard-earned after-tax dollars is now worth just five cents.

To distract us from the fact that we’re being systemically robbed on a massive scale, the government invented a neat little trick called the Consumer Price Index.

According to the government website, the CPI is “a measure of the average change over time in the prices paid by urban consumers for a market basket of consumer goods and services.”

The CPI used to be a basket of goods that the “average person” spends their money on. Bread, eggs, milk, gas, Fortnite gaming credits. In other words, it’s a quick proxy for inflation. If you know how much consumer prices are up, you theoretically know how much inflation is up.

For example, if the cost of a steak was $5 last year and now it’s $6 this year, steak inflation is 20%. By having a basket of goods that the average person would use, you can theoretically get a good sense of the inflation rate.

But there are three major problems with their CPI scam

During the Bush administration, Federal Reserve Chairman Alan Greenspan lobbied to change the methodology. He believed that if consumers could no longer afford an item in his basket, he should be able to switch it for a cheaper substitute. Goodbye steak, hello ground beef.

And so has every administration since. No more Crest, just generic toothpaste. No more full-loaf whole wheat bread, just a cheap white half-loaf. The Brits just got rid of haircuts and Guinness. Governments are no longer comparing apples to apples, so no wonder the inflation rates are untethered from our experienced reality.

Governments also realized they could manipulate the inflation rate by just removing items from the basket. In 1983, they removed the cost of buying a house and replaced it with a rental payment. Isn’t tracking the rising cost of the biggest purchase in your life kind of important?

Here’s a shocker: If we compared today’s prices to the same basket of goods that we used back in 1980, real inflation is actually pushing 13%.

The CPI is one of the biggest scams in American history.

Why would governments lie about the real inflation numbers?

It’s in their best interests to lie to us.

What’s extremely interesting is that, every once in a while, a bureaucrat slips up and accidentally tells the truth. The Federal Reserve insists they can keep inflation under 2%, but a few weeks ago, the White House published its 10-year budget in which they inadvertently revealed that they don’t even believe their own central bank’s target numbers.

Meaning we can ignore the official government inflation numbers from here on out.

Because the federally-manipulated basket just doesn’t apply to us.

We need to crunch our own inflation numbers.

It totally depends on what’s in your personal spending basket:

If you’re a young Canadian trying to buy a house, you know that average house prices have inflated by over 40% since last year.

Your basket will look very different than mine, but it will almost certainly include expenses such as food, housing, clothing, transportation, medical, insurance, education, and recreation.

We can’t just rely on fake government figures, or even honest average estimates. We’re at a stage in this globalist-individualist-consumerist economy where it only makes sense to track our personalized inflation rate.

How to calculate your real inflation number

I bet you a billion Bitcoin the increase is more than 2%.

Tech nerds: We desperately need someone to create a real-time, individual inflation rate calculator. If Starbucks raises their prices or Hellman’s shrinks their mayo jars, consumers should know how it’ll affect their long-term bottom line.

Everyone needs to know their real inflation number. People deserve to know the whole truth about their financial situation.

Now what do I do?

It depends if you want to go broke, break even, or grow wealthy.

The modern economy forces everyone to make a choice:

Fall behind: Most people just ignore their real inflation numbers and watch their purchasing power erode year after year. (They probably stopped reading this article five minutes ago.) They scratch their heads and try to figure out why life seems to get harder every year. Eventually, they reach a breaking point, placing the blame on immigrants and voting for extremists.

Stay even: To stay even, tighten your belt and make adjustments. Eliminate or ameliorate high-inflation goods and services. Eat less roast lunches at restaurants and eat more soup at home. Switch to generic. Buy smaller sizes. Buy a bidet. Grow your own tomatoes. Brew your own kombucha.

Get ahead: If you want to get ahead, you have to move the majority of your cash into investment classes that generally keep up with inflation: real estate, commodities, crypto, stocks, etc.

The problem with real estate speculation is that for-profit landlording is morally wrong and it inflates the real estate market.

The problem with commodities speculation is that it drives up food prices and starves poor people.

The problem with crypto speculation is that it’s a giant Ponzi scheme.

The problem with stock market speculation is that you’re passively skimming money off the time, talent, and effort of active workers.

To get ahead by these routes means someone has to fall behind.
It almost makes you wonder if we need to seriously re-think the global economy.

It’s almost as if we need to move to a circular bioeconomy where democracy determines fairness, nature determines sustainability, and instead of earning profits off people who are weaker than ourselves, we all live off our incomes and retire on our savings in a community-first economy without inflation.

The cost of living is far too important to entrust to politicians. [Medium]