California and several other Western states experienced their hottest summers on record this year.

Warming trends are fundamentally altering life on the West Coast. Here is a breakdown of what the super-heated summer means:

Nationwide, the stretch from June to August tied with the 1936 Dust Bowl summer as the hottest on record, with temperatures across the country averaging 2.6 degrees above normal, according to the National Oceanic and Atmospheric Administration. A record 18.4% of the contiguous United States experienced record-warm temperatures.

The grim conditions of the Dust Bowl years were more of an outlier, said Karen McKinnon, an assistant professor at the UCLA Institute of the Environment and Sustainability, while the latest extremes belong to a larger warming trend. In fact, she said, the summer of 2021 was even hotter than mere extrapolation would suggest, leading some to question whether that warming is accelerating.

Rising heat and drought conditions have fueled huge fires this summer. Firefighters say the heat has made the terrain so dry that it is primed for ignition, spreading faster and hotter fires than they’ve ever seen.

The Dixie and Caldor fires became the first to burn from one side of the Sierra to the other, and officials fear conditions will worsen in the coming months as the winds of fall arrive.

More than 2 million acres have already burned this year, and more than a dozen active wildfires are blazing across California. Added heat, dryness and the potential for dry lightning could make conflagrations worse or even ignite new ones.

“The warming of temperatures overall can lead to drying, and that drying later in the season can lead to warming, and all of those things can lead to enhanced wildfire,” McKinnon said. “Basically, it’s all linked.”

California water regulators took unprecedented action this summer, passing an emergency regulation that will bar thousands of Californians from diverting stream and river water as the drought worsens.

In Southern California, the Metropolitan Water District — which supplies water to some 19 million people across six counties — declared a water supply alert in August, calling on the region to conserve vital resources.

The move came one day after U.S. officials declared the first-ever water shortage on the Colorado River, which is a key source of water for the region.

While Gov. Gavin Newsom urged all Californians to voluntarily cut their water usage by 15% in July, it is likely that more restrictions will come soon.

Alan Barreca, an environmental economist at UCLA, said extreme heat is among the deadliest of natural disasters, and soaring temperatures often disproportionately affect the most vulnerable, including pregnant women and infants, elderly people, homeless people and residents of low-income neighborhoods.

Extreme heat also could be deadly for people without air conditioning during a heat wave, especially when residents are prompted to stay inside with doors and windows shut to avoid the hazardous effects of wildfire smoke.

A heat wave that blanketed the Pacific Northwest in June claimed the lives of hundreds, including immigrant farmworkers and the elderly.

An estimated 1 billion sea creatures died because of heat off the coast, and the Sacramento River is facing a “near-complete loss” of young Chinook salmon because of abnormally warm waters.

Conditions have already become so dire that the California Independent System Operator, which runs most of the state’s power grid, on Tuesday asked the federal government to declare an “electric reliability emergency” that would allow six natural gas-fired power plants — including facilities in Huntington Beach and Long Beach — to generate power at maximum levels, even if they violate air pollution limits.

It‘s a scrambling effort by state officials to reduce the risk of rolling blackouts in the face of increased energy demands by adding new electricity supplies, including fossil-fuel resources that contribute to worsening heat waves — a short-term sacrifice that has proved controversial among clean energy groups.

The grid operator was granted a similar request during a heat wave last September, but only for a week. This time, the agency is asking for 60 days — a sign that it expects extreme heat could continue well into the fall. The ISO has already issued two flex alerts this week, which call on residents to conserve energy from 4 to 9 p.m., when net demand is typically at its peak.

Climate by the numbers

The average temperature during meteorological summer for the contiguous U.S. was 74.0 degrees F, 2.6 degrees above average. This technically exceeds the record heat of the 1936 Dust Bowl Summer, but the difference is extremely small (less than 0.01 of a degree F).*

The average summer precipitation total was 9.48 inches — 1.16 inches above average — making it the eighth-wettest summer in the historical record. Mississippi had its wettest summer on record while Alabama, Massachusetts, Michigan and New York had a summer that ranked among their five wettest. Meanwhile, Minnesota had its seventh-driest summer on record. 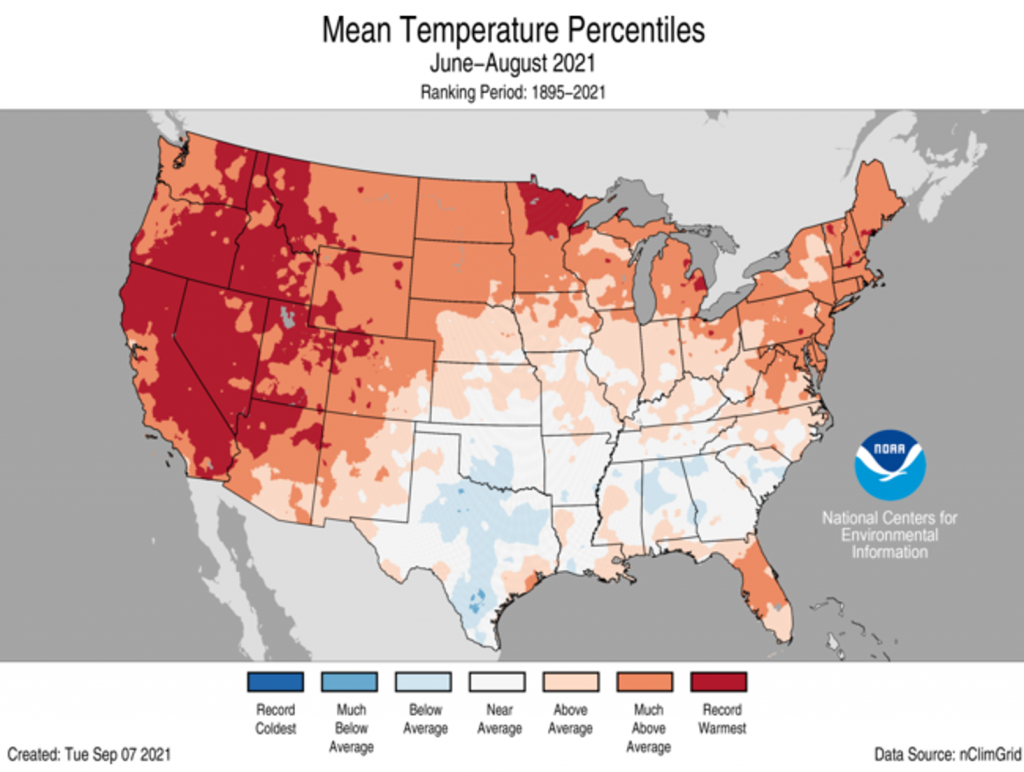 The average U.S. temperature for the first eight months of 2021 was 55.6 degrees F — 1.8 degrees above the 20th-century average — making it the 13th-warmest such YTD on record.

California and Maine each reported their third-warmest YTD, while 16 other states had a top-10 warmest YTD.

The nation saw an average of 21.19 inches of precipitation for the YTD, 0.48 of an inch above the long-term average, which ranked in the middle third of the record.

Other notable climate and extreme events from the report

More than 1 million residents, and all of New Orleans, were without power. Grand Isle, Louisiana, took a direct hit: An unprecedented 100% of homes were damaged, and almost 40% were nearly or completely destroyed.

Devastating flash flooding with multiple fatalities occurred during August from Tropical Storm Fred in western North Carolina, Tropical Storm Henri across parts of the Northeast, and historical flooding from a complex of thunderstorms that moved across middle Tennessee.

From late August into early September, Hurricane Ida also dumped an extreme amount of rain across Louisiana; the hurricane’s remnants submerged portions of the Northeast. With 35 fatalities reported during August, it was the deadliest month for flooding across the U.S. since Hurricane Harvey in 2017.

Wildfires swept through even more of California

The Dixie Fire in north-central California became the second-largest fire in the state’s history. The state’s Caldor Fire also grew rapidly during August, threatening communities in South Lake Tahoe. Air quality remains a concern across the U.S. due to increasing concentrations of airborne ash and fine particulates from smoke.

Just coming out of a Corona emergency, a new Dust Storm would be catastrophic… But I think we are getting rapiddly closer to a global collapse phenomenon. 2020 was just the beginning of the End… So be prepared for the worst! It is ‘en route’! [LA Times, NOAA]