Skywatchers on Thursday night will be treated to a near-total lunar eclipse as the full moon is plunged into the blood-red light cast by Earth’s shadow.

The spectacle will be visible from all of North America, with the exception of eastern Greenland, including the entire Lower 48, Alaska and Hawaii, as well as parts of South America and Russia.

Though it’s technically not a total lunar eclipse, it’s about as close as one can get to totality without actually being there. At peak, 97 percent of the moon will be covered by the umbra, or the darkest part of Earth’s shadow. Only a sliver on the bottom left of the moon will remain faintly illuminated.

A striking element of Thursday night’s eclipse will be its duration – 3 hours, 28 minutes and 24 seconds – which makes it the longest partial eclipse in 580 years.

Here’s how the Lunar Eclipse will look on Nov 19 at key moments pic.twitter.com/SwJ6URnVTQ

At the time of the eclipse, the moon will be full. Some refer to the November full moon as the “beaver moon,” a name assigned by Native Americans when beavers were particularly active in preparation for winter and it was time to set traps. The November full moon is also sometimes called the frost, frosty or snow moon for the wintry conditions beginning at this time of year.

A moon, once eclipsed, is also sometimes called a “blood moon” because of its reddish or rusty tone.

Eclipse in the US

The eclipse will begin when many are asleep along the East Coast, but those residing on the West Coast don’t need to be night dwellers to take in the best parts of the show.

The lunar eclipse will begin at 1:02 a.m. Eastern time Friday, or 10:02 p.m. Pacific time Thursday. That’s when the penumbra, or peripheral darkening associated with the Earth’s shadow, will nick the moon.

There won’t be much noticeable difference in how the moon appears. For that, you’ll have to wait until 2:19 a.m. Eastern time (11:19 p.m. PST), when the umbra begins traversing the moon.

There won’t be any “totality,” but the eclipse will grow deeper and more intense until 4:03 a.m. Eastern time (1:03 a.m. PST), when more than 97 percent of the moon will be immersed in the umbra. It’s not technically a total eclipse, but for all intents and purposes, it is from a visual standpoint.

What is an eclipse?

Lunar eclipses occur when the Earth intercedes between the sun and the moon. We’re used to seeing the full moon illuminated by light arriving directly from the sun, but when the Earth blocks that light, a shadow sweeps across the lunar surface. During total and near-total lunar eclipses, most of the moon’s face is occupied by that shadow, but some sunlight passing through Earth’s atmosphere can become tinged red and bathe the moon in an eerie amber hue.

Unlike with solar eclipses, no special glasses are required for viewing a lunar eclipse. You’re simply looking at sunlight reflected off the moon, rather than staring directly at the sun. The former is okay. The latter is a no-no.

The last total lunar eclipse visible from the United States occurred May 26, and another one is in the cards for May 16, 2022.

Hopefully, the sky won’t be too cloudy! [WP] 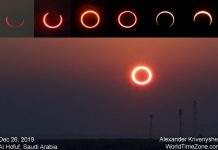