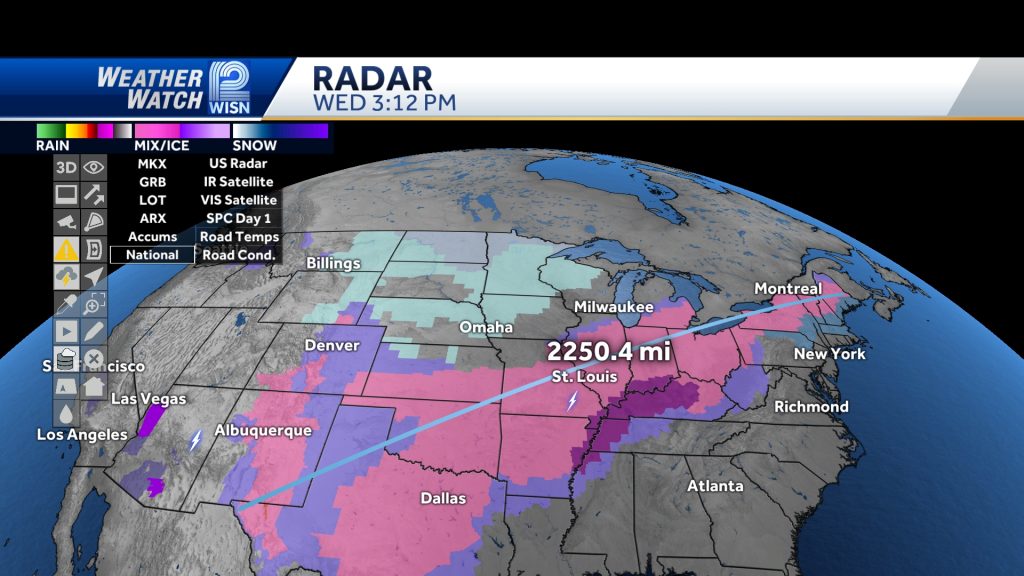 Portions of major interstates are shut down, hundreds of flights are canceled, school is called off, residents are being told to stay home and one state in particular – Texas – is keeping a wary eye on a significant winter storm moving across the Plains and Midwest.

The storm, named Landon by The Weather Channel, is already bringing ice, snow and plunging temperatures to many areas, and it’s expected to impact a wide swath of the U.S. from the Rocky Mountains to the Southern Plains up to the Northeast through Friday.

Here’s a look at what’s happening:

“If you do not have to travel, please stay off of the roadways as much as possible, give the crews room to work,” Sarah Russell, commissioner of emergency management for the city of St. Louis, told The Weather Channel Wednesday morning.

If you must go out, Russell said, be prepared for delays and the possibility of being stranded. Have supplies such as snacks, water, blankets, salt, kitty litter, as well as a phone charger and a full tank of gas when you start your trip.

“We know this is a long duration storm,” she said.

Dallas, dozens of other school districts close in Texas

Schools across Central and North Texas are announcing school closures for Thursday, and in some cases Friday, as the storm’s impacts widen.

Ice is a major concern.

Districts that have already called off classes accoring to local media include Dallas, Arlington, Denton, Fort Worth, Irving, Plano, Round Rock, Hays and Lake Travis

Deliveries will be delayed

At least one major shipping companies is warning customers that delays are possible.

“The FedEx meteorology and operations teams are closely monitoring Winter Storm Landon as it develops across the Central United States,” FedEx said in an update posted Wednesday on its website. “The storm could create hazardous conditions for our team members and their safety remains our number one priority.

“Contingency plans are in place, and we will be prepared to provide the best possible service in areas affected by the winter storm and as local conditions allow.”

I-70 closed in Missouri

A portion of Interstate 70 is closed west of Columbia as of 11:45 a.m. CST, with road conditions described as “terrible” by emergency management officials, according to a tweet from the Kansas City office of the National Weather Service.

11:30 AM Update: I-70 is currently closed west of Columbia MO. Emergency Management officials describe the road conditions as terrible. Don’t travel across central Missouri if you don’t have to!! pic.twitter.com/4ILd4jGXrg

Truckers are having trouble getting up hills in the area and at least one semi is jackknifed, according to the state Department of Transportation.

Things aren’t any better in Central Ilinois, where a portion of westbound I-74 in Piatt County is blocked by multiple jackknifed semi trailers as of 11:45 a.m. CDT.

Traffic cameras early this morning showed treacherous conditions on I-80 in the Chicago area.

Cook County: A semi crash is blocking the ramp from westbound Interstate 80 to southbound I-57. While the image doesn’t show the crash, it does show how bad conditions are right now. pic.twitter.com/erFDX2SsvE

Other major cities reporting airport delays or cancelations include Dallas-Fort Worth, Denver, Detroit and Indianapolis.

Here’s a look at news from Tuesday as preparations for the storm kicked into high gear:

Amtrak canceled more than a dozen train routes that would normally run on Wednesday and Thursday, including New York to Chicago, Washington, D.C. to Chicago and Oklahoma City to Fort Worth.

A state of emergency was declared in Missouri and Illinois Gov. J.B. Pritzker issued a disaster declaration ahead of the storm. Both states activated National Guard troops.

“With a quarter-inch of ice, there can be power outages and roads will be a mess,” weather.com meteorologist Ari Sarsalari said Tuesday. “When you get up to about a half-inch or more, that’s when you start to see a lot of tree branches coming down, significant power outages.”

The prospect of losing electricity is especially unsettling in parts of Texas, where just shy of one year ago an outbreak of record-breaking frigid weather and a trio of storms, in particular Winter Storm Uri, left millions of people without electricity or clean running water, in some cases for several weeks.

That weather was unprecedented for Texas, with multiple back-to-back days of below-normal temperatures.

“The coldest air of this outbreak will only last a few days, at most, rather than the solid week straight siege one year ago,” weather.com senior meteorologist Jonathan Erdman wrote in an article published Monday. “While this will certainly be a headache, we don’t anticipate a repeat of the multi-billion dollar disaster that was the Feb. 2021 cold wave.”

The Texas Department of State Health Services connected more than 246 deaths brutal winter weather that month, including people who froze to death in their own homes or succumbed to fires or carbon monoxide poisoning while trying to stay warm.

Texas Gov. Greg Abbott assured residents Tuesday the grid was up to par, and said the highest demand was expected Friday morning.

“No one can guarantee that there won’t be any” outages, Texas Gov. Greg Abbott said during a briefing in Austin. “But what we will work to achieve, and what we’re prepared to achieve, is that power is going to stay on across the entire state.”

Some school districts in Colorado announced closures or remote learning days for Wednesday, and some local government offices were either closing for the day, or opening on a delayed schedule.

Closures were also announced in parts of Kansas, including the Wichita area.

The latest in a parade of winter storms

Landon is the fourth winter storm to cause travel delays and power outages concerns in just the past three weeks. That’s not unusual this time of year, though. The end of January through February is the height of winter storm season. [Weather]