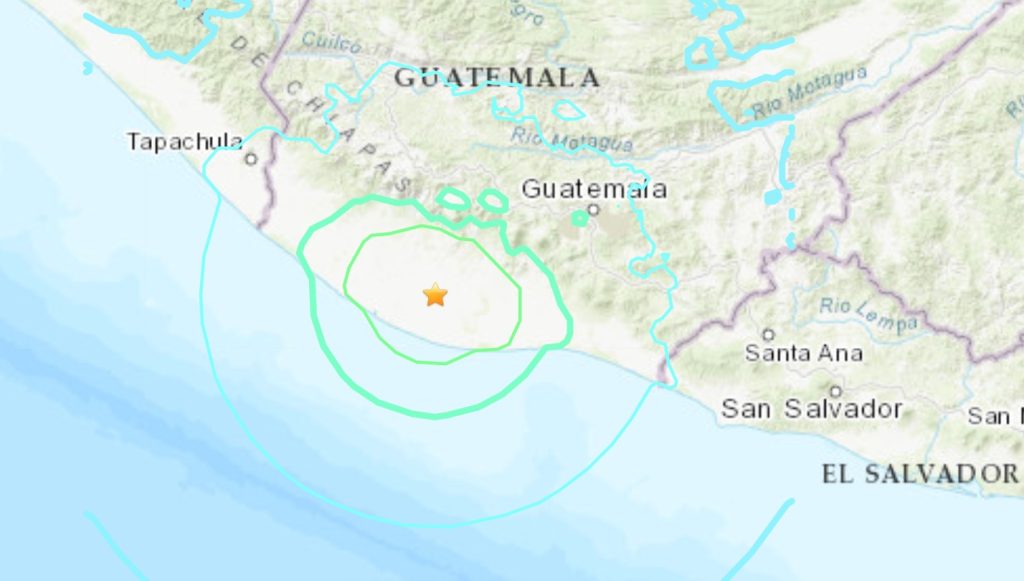 A M6.2 earthquake struck near Mazatenango, Suchitepeque, Guatemala, early morning on Wednesday, February 16th, 2022, at 1:12 am local time, at a shallow depth of 10 km below the surface.

It was felt across Guatemala and people panicked ran out of their homes. Netizens also reported feeling rumblings in El Salvador and Mexico.

That first strong earthquake was followed by two other aftershocks, with a magnitude of 5 and 4.8 on the Richter scale.

The strong and shallow quake was felt widely and has caused widespread light to moderate damage. As of now, many people in the area have reported landslides on highways, structural damage in some communities and power outages.

Neither injuries nor deaths have been reported yet.

Woken up by room swinging side to side (east to west) gently at first but quite strongly towards the end.

Strong shaking with entire house seeming to move up, down, and sideways. We ran outside and took refuge in our car. Lights and wifi still on

It was the strongest quake I have experienced in my 32 years in Guatemala. Fuego Volcano has been active with explosions earlier Tuesday night.

I was on my bed still awake, when I hear some weird noise than the quake begins very hard, i felt like it stop for a second or two than it kept going again, very strong, I felt the house moving and the windows rattling, it lasted for about 20 to 30 second

Was outside. Lots of noise, buildings and walls rumbling very loud, trees and street lamps shaking. Electricity went off halfway. Dogs running around scared and barking like crazy. The ground had two or three separate strong pulses of shaking during the quake

Guatemala is a highly seismic country and the population still remembers the great earthquake that devastated Guatemala on February 4, 1976.

That M7.5 earthquake, which also occurred at dawn and had its epicenter in the Caribbean department of Izabal, destroyed two thirds of the country, killed more than 23,000 deaths, injured 76,000 and left more than a million victims.

Are you ready for the next catastrophic eruption or earthquake. One thing I would do is subscribe to Galileyo to get a satellite phone to communicate with your loved ones and be able to receive uncensored news from people you trust (like me) when mobils and internet are gone…