Some weird movements are associated with two volcanic areas in the US West: Glacier Peak volcano in Washington and Three Sisters volcano in Oregon.

Glacier Peak in Snohomish County, Washington is currently at a “very high” threat for eruption.

That’s the top classification of threat levels, according to federal scientists, who seek new monitoring systems:

Meanwhile, the ground is swelling slightly faster than usual beneath parts of the Three Sisters volcanic region in Oregon, a new study shows, but scientists say there’s no signs of an imminent eruption.

An uplift of about an inch in the ground was detected roughly 3 miles west of South Sister, according to researchers from the Cascades Volcano Observatory of the United States Geological Survey. 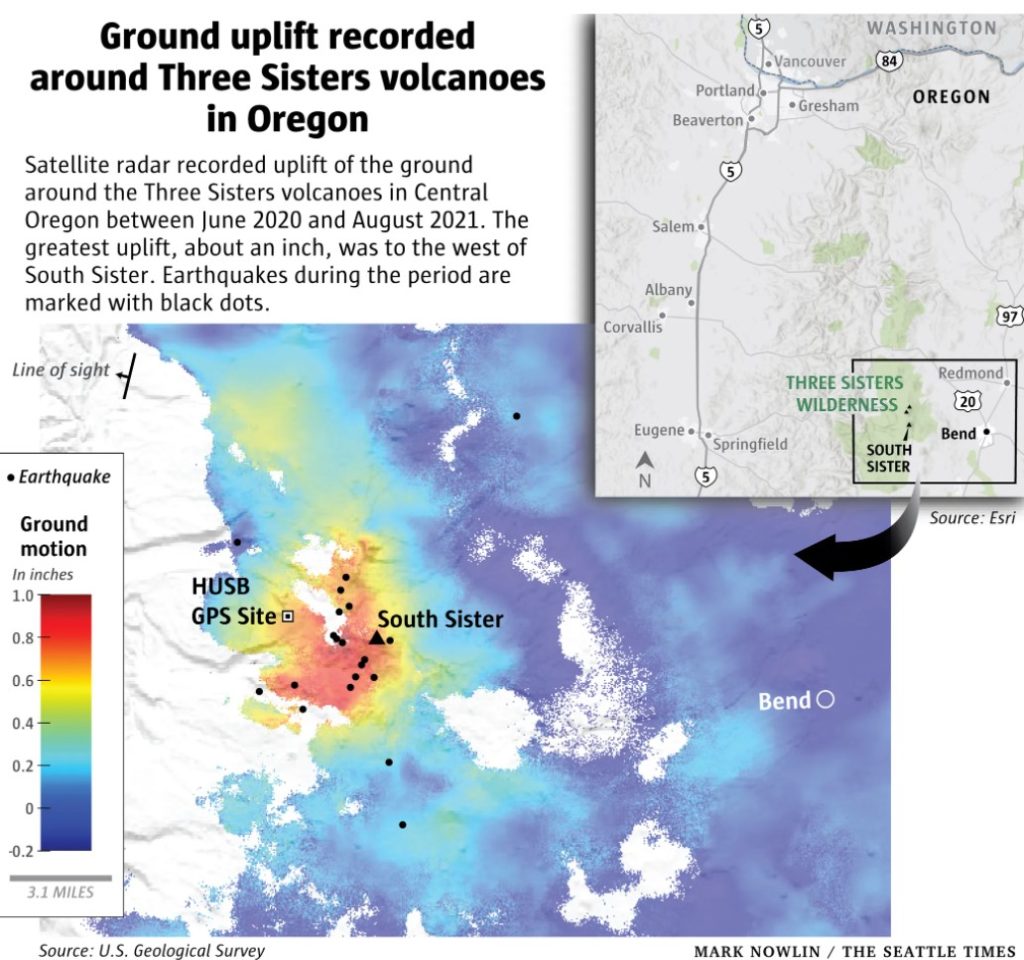 Seismologists also detected “brief bursts” of small earthquakes recently, once each in October, December and January.

Using GPS and satellite imaging technology, researchers found that an area about 12 miles wide saw a ground uplift of about 0.9 inches between the summers of 2020 and 2021, and an additional 0.2 inches near the center of that area since April 2021.

While the findings did detect an increase in the rate of ground uplift — second only to the rate measured in the same area between 1999 and 2000 — the region has experienced an uplift of about 12 inches over the past 25 years. 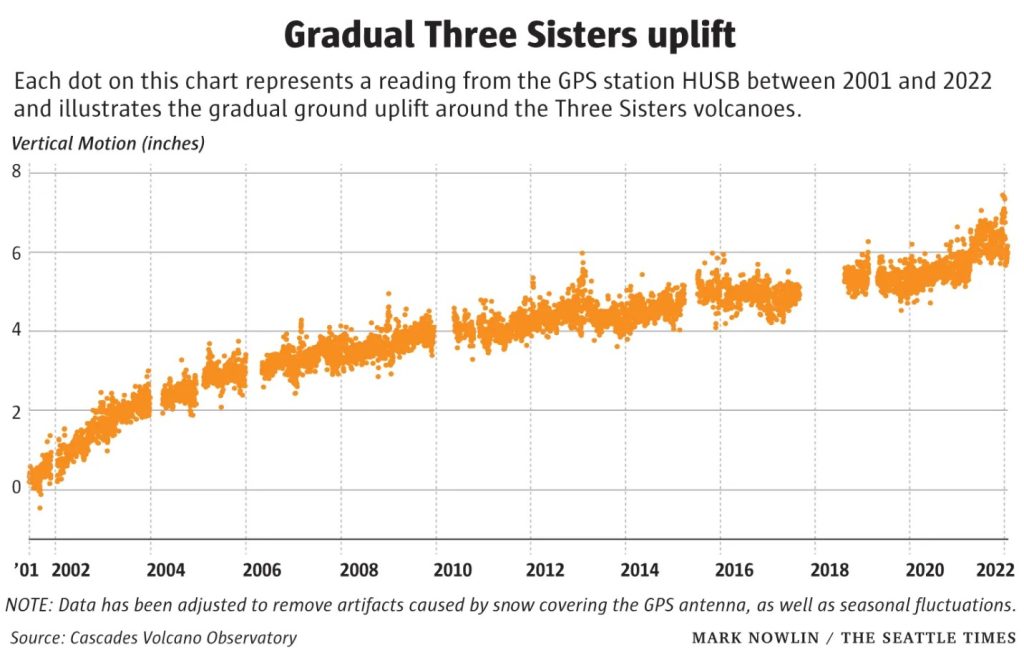 Continuous GPS monitoring, satellite imaging and other tools allow seismologists to understand what’s normal behavior for a volcanic region, and what isn’t.

Ground uplift west of South Sister is most likely caused by the accumulation of magma or magmatic fluids — water and gas — but these things could have begun decades if not centuries before local seismologists began keeping a record.

Before an eruption, magma needs to break through layers of rock and would trigger strong quakes and release gas in the process.

Of course, there’s no guarantee an eruption will ever occur in the area.

According to CVO Scientist-in-Charge Jon Major, signs of an imminent eruption would include much faster ground uplift and an increase in the frequency of earthquakes that are bigger and occur at shallower depths.

“We’re not seeing anything like that right now,” Major said. “What we’re detecting right now can very much be part and parcel of normal behavior. Until 25 years ago, we just never had the technology to be able to see that.”

The last eruption at South Sister occurred about 2,000 years ago but it was in 2001 that researchers detected ground uplift west of South Sister.

According to the USGS, Oregon and Washington, with more than 25 active volcanoes, comprise one of the most volcanically active regions in the country.

The uplift in the Three Sisters area is most likely caused by magma 4 miles underground. Bursts of small earthquakes are common in the area and throughout the Cascade range, which is essentially a chain of active volcanoes.

“These technologies now help us understand what is typical and what is normal,” Major said, “What we want to be able to detect is the abnormal.” [Seattle Times]

Well it seems that the Cascades volcanoes are slowly waking up… Are you ready for the next catastrophic eruption or earthquake. One thing I would do is subscribe to Galileyo to get a satellite phone to communicate with your loved ones and be able to receive uncensored news from people you trust (like me) when mobils and internet are gone…